Share All sharing options for: Expect a Full Strength Lineup for Dallas Tonight

Not that this should come as a big surprise to anyone, but expect a full strength lineup for Dallas tonight. MLS Soccer has two good videos up with Schellas Hyndman, George John and Ugo Ihemelu and you can see in the videos that Ugo and George were training next to each other in practice yesterday suggesting The Big Greek will start next to Ugo.

It's been a rough defensive patch for FCD without George having given up three sloppy goals in the games that he missed and his return should be a huge boost tonight for Dallas as Schellas says in the videos below. I'm also excited about getting back a full strength Danny Cruz in the midfield and you wonder if Cruz could possibly take the place of Ricardo Villar at attacking mid with Andrew Jacobson sent back to his more natural 2-way mid position.

You also wonder if Jackson could possibly take the place of Marvin Chavez on the right side. He's scored some huge goals in the non-MLS competitions this year and Chavez looked completely gassed on Saturday night in Kansas City.

With 11 days off(besides the Tigres friendly), between tonight and the next competitive game, Schellas has the luxury of using every bullet he's got tonight as Dallas looks to make their fourth US Open Cup final. 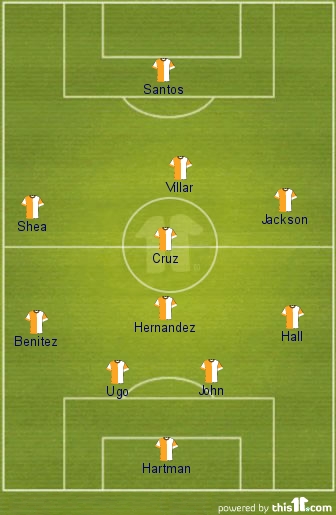