Day 2 in Kansas City began with a nice late wake up time and a trip to Johnny's Tavern in downtown KC for some Liverpool vs Bolton and lunch. Immediately upon arriving, we met some Kansas City Cauldron members who were, of course, good people and watched the game. Luis Suarez is a fantastic player, but really needs to learn how to keep his feet and quit whining. Upon leaving we were given a parking pass which would come up huge later.

After a trip to Target, some more shut eye and a little bit of extra soccer, it was time to head to Livestrong Sporting Park for the big game. For Dallas fans, the best way I can describe the location of LSP would be if it was in the middle of the Stonebriar Mall development on steroids. The area is called Village West and it's an enormous development with a Cabelas, Great Wolf Lodge, minor league baseball stadium, a huge outdoor mall and, oh yeah, a 100,000 seat NASCAR speedway in the backyard. It's a seriously huge area with its own tax laws and LSP is right smack dab in the middle. I'll have a lot more on LSP's logistics in the last travel blog as we took a guided tour of the stadium yesterday morning.

Thanks to our parking pass, we were able to zip by the regular parking and get to the lot closest to the stadium which is reserved for what basically amounts to the supporters section(aka Sporting Club Members). That's right, the closest parking is reserved for the Supporters and tailgaters. Everyone associated with the KC supporters were good people, it was a great time catching up with old and new faces. 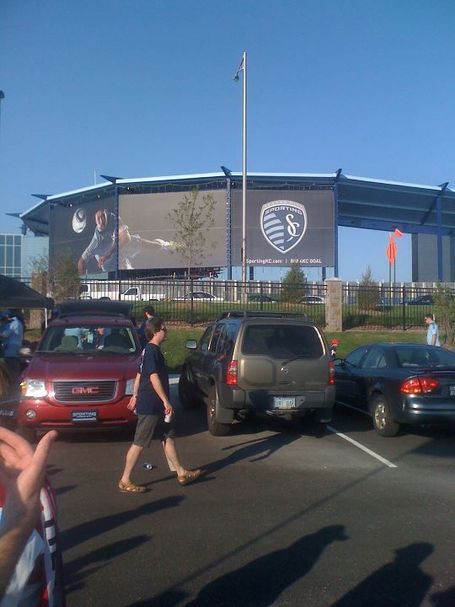 Upon entering LSP, you realize what a palace of soccer they have in Kansas City. Between the amazing roof, SKC logos everywhere, great branding, huge amount of staff roaming the stadium and energetic music playing. The supporters are not really in the stands yet because they have a dedicated member bar that only people with the tickets in designated sections including the supporters sections can enter during the game. Inside that bar there are reduced price drinks, food as well as TV's and merchandise stands, did I mention you can walk out from the bar into the supporter's section area? It's an amazing setup. 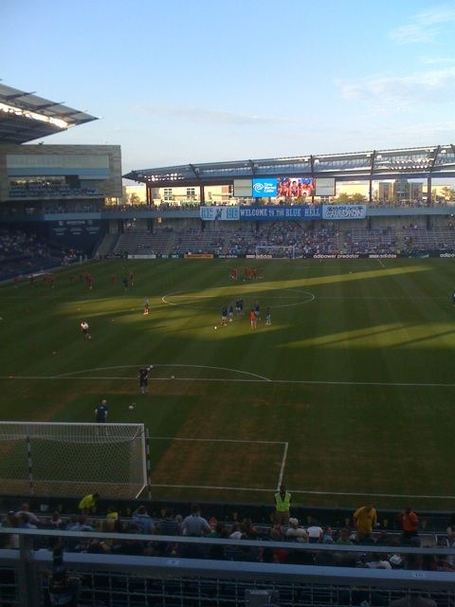 About 30 fans made the trip from Dallas, parked in one of the corners at the front of an elevated section. It was a fantastic vantage point to watch the game and the FCD supporters showed extremely well both on TV and in the stands. 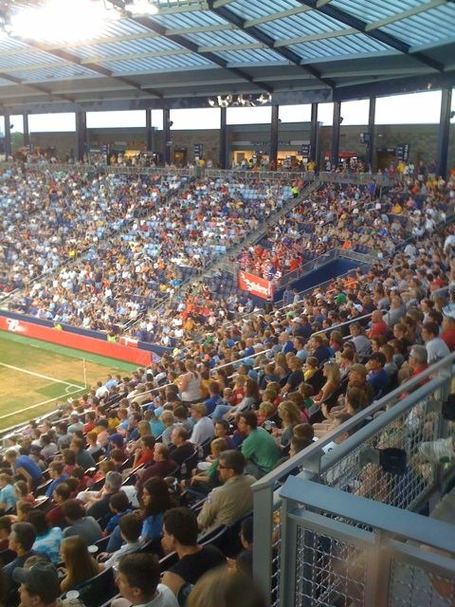 As the game was about to start, you realize these are not your parents KC Wizards. The stadium was packed at kickoff with great pre-game hype videos and content encouraging the fans to send their pictures in to be shown on the stadium video boards at halftime. This crowd was exponentially louder than any crowd I've ever heard in Kansas City. The fans around the stadium actually clap and chant along with the supporters for most of the match and created an atmosphere that was electric. Half the crowd was standing anytime SKC made a run at the FCD defense and they certainly gave the Dallas supporters a ton of stick as well.

You all saw the game and I don't really need to describe how that went. Obviously it was an amazing moment to witness that gutty comeback from FCD on the road in a hostile environment and I don't think anyone can question the cajones of Schellas and his team.

After the game and emotions settled down, most of the fans went to that members bar, which opens up to the public after the game. While we were told this was the place to be after the match, SKC fans apparently were not in the mood to drown their sorrows and the place was pretty empty with mostly Dallas fans inside. After an adult beverage or two, most of us dispersed and headed back to the hotel(walking distance). One really cool touch about the members bar is the scarf wall on one side. SKC encourages anyone to leave a scarf for their team on the wall and amazingly there was a Dallas Burn Season Ticket Holder's scarf on there. 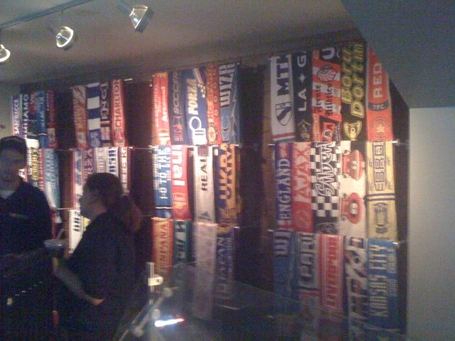 Overall the game was an amazing MLS experience. When you see an enthralling game like that, in front of a sold out crowd with huge league implications on the line you've got to think this is exactly what Lamar Hunt envisioned when the league was started back in 1996. I highly encourage anyone who has the chance to head to Kansas City next year for the FCD game there. You won't leave disappointed.

In the last travel blog, we tour Livestrong Sporting Park.