Harlan and Amanda(newlyweds) met up with myself and Amy(newlyweds) to head up to KC yesterday morning for tonight's game. We finally got away at about 930 to head to my old stomping grounds of Norman, OK for lunch. One of my favorite parts of going to Kansas City is stopping at the alma mater to grab a quick bite to eat and check out the surroundings.

It's the first week of school at OU and we arrived around 12:15, right when a block of classes gets out, so there were wide-eyed freshman everywhere. You can spot the freshman as those kids who actually dressed up and did their hair for class. The ones in mesh shorts, hat and flip flops? Not freshmen.

After grabbing a bite to eat at the Norman staple of Pita Pit, we're back on the road. For some reason, I always seem to stop at the first of those travel stops you see in Kansas that are in the middle of the highway. They're always super clean and it gave the wife an opportunity to get a Kansas pin 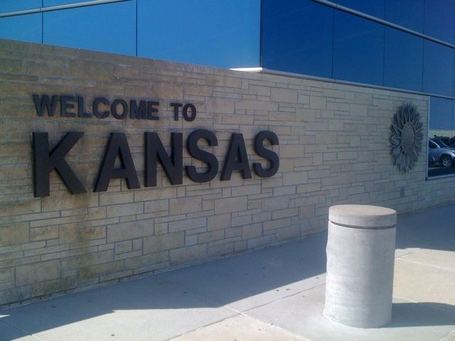 Once you get into Kansas, you've got about 4 hours left to go. Going through the Flint Hills is always fun because you can see for miles so getting the car up to 100 really isn't an issue. As some people said yesterday, the speed limit is up to 75 in Kansas, but the flow of traffic was really about 90MPH for a good 50 miles.

We got into Kansas City at about 630p and headed for the hotel to change before heading to grab some legendary Kansas City BBQ at Oklahoma Joe's with Kansas City Sam and his girlfriend. Minus a couple of Swedish Fish, I didn't eat many snacks after lunch in order to be hungry and get the full Oklahoma Joe's experience and let me tell you, this delivered.

When you walk into Joe's, inside a gas station, you're immediately hit by how many people are in this little area. They have a small seating area and a line that stretched nearly out the door. 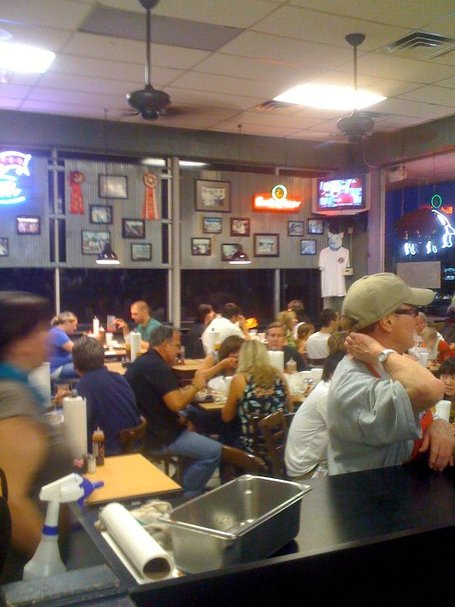 The options are a bit overwhelming, but I settled on the classic Z-man which is a beef brisket sandwich with a slice of provolone cheese and two onion rings on top. Sam mentioned that BBQ purists aren't really a fan of a sandwich with onion rings and cheese but man this thing was like no BBQ sandwich I've ever had. You really taste three distinctly different tastes in the bite with the cheese first, then the crunch of the onion rings and finally the sweet brisket BBQ. 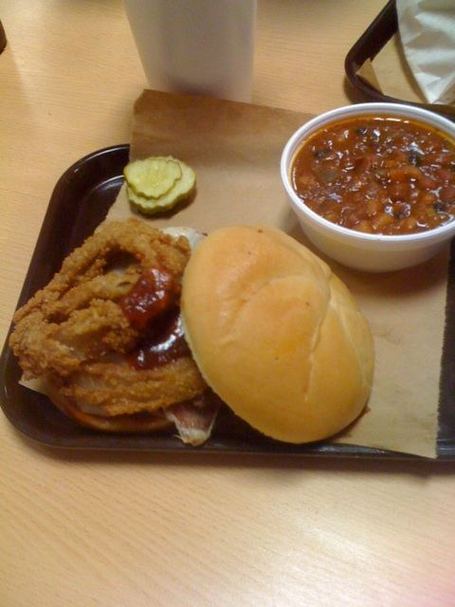 I was a bit skeptical of Oklahoma Joe's being overhyped but this was probably the best BBQ sandwich I've ever had. Absolutely amazing. Anyone who says Arthur Bryant's is better, well I just don't get that. After some good conversation with Sam and company, and a quick call to congratulate my sister on getting engaged tonight, we left destined for the Power and Light District.

The Power and Light District is kind of like Victory Plaza on steroids. Imagine if there was a roof over victory and bars instead of office space in those buildings, plus a huge stage at the end. Yeah, it kind of attracts the Affliction shirt crowd, but if you're young and going to Kansas City it's really a must to check out. 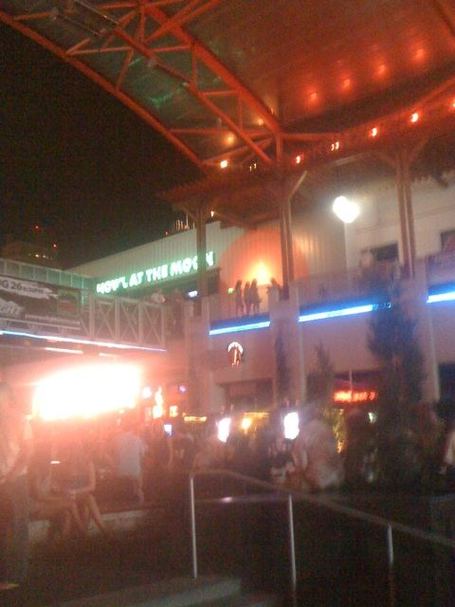 The people watching was really spectacular and the night was a good time. We headed back to the hotel around 1am and called it a night. This morning we're heading back there to a place called Johnny's Tavern to catch the Liverpool vs Bolton game before tonight's game. I can't wait to see Livestrong Sporting Park, it looks absolutely immaculate from the outside and everyone tells me tonight's game is sold out, so this night should be great.