There won't be any hurricane delays or postponed games this weekend between Sporting Kansas City and FC Dallas. While MLS had to reschedule some games on the east coast this weekend due to Hurricane Irene, we won't see the effects of that in the midwest.

Probably a good thing too since Daniel and many of the Inferno are making the drive to the new and beautiful LIVESTRONG Sporting Park.

The club and a few others like Zach Loyd and Maicon Santos are in Kansas City after the weird and wacky debacle in Toronto yesterday/Wednesday. Now Dallas has a big, if not huge task on hand for tomorrow's match with Sporting KC.

(read on for more thoughts, questions and potential lineups)

1. Does Dallas have the gas to handle this game (and next Tuesday's)? Talk about a road trip from hell, go to Toronto, have a game called after halftime, replay the entire game the next day, then fly to Kansas City, play that game on Saturday only to then have to travel the next day to Seattle for a USOC semifinal on Tuesday. That is a lot of travel. A lot. No Daniel Cruz in the midfield for this one either makes things even tighter, not to mention we still don't know the status of Andrew Jacobson here either. For those who don't know he suffered a peanut allergy just moments before the Toronto game yesterday (the reason why newcomer Jack Stewart was in the lineup).

Hopefully AJ returns and helps give some new energy to the defense, along with a rested up Loyd. If not we can expect some tired legs on the pitch between Daniel Hernandez, Ugo Ihemelu, Jair Benitez and others.

2. Slowing down the game. If Dallas wants to get at least a point in this one I think they have to play the possession game and slow things down a great deal. We know most of the guys are running on fumes at this point but slowing this game down and spreading out the attack will go a long way. KC has the speed up front and the skill players in the midfield to cause issues with the Dallas defense and defensive midfield. We saw in Frisco when these two met that this team can and will score from anywhere with Graham Zusi, Teal Bunbury, Kei Kamara and Omar Bravo.

3. Hounding their defense. Whether it is Ricardo Villar, Fabian Castillo, Brek Shea, Santos, Marvin Chavez, or even someone off the bench like Ruben Luna, Dallas has to step up the pressure on their defense. I think this is a game we'll possibly see a shift back to a 4-4-2 with Castillo and Santos up top with one another. Dallas has to find ways to cause problems for Chance Myers, Julio Cesar, Matt Besler, and Seth Sinovic. FCD did a good job at getting pressure on Toronto's defense yesterday in certain spots. If they can get up early on this group, it could help go a long way in getting points out of this trip.

I'm not sure I've seen a player improve more over the last year or two than Zusi. He's an absolute beast for them right now in the midfield and will cause problems for Dallas if FCD doesn't stick someone on him he will create chances for Bunbury, Kamara or Bravo.

One of the few rookie of the year candidates for me right now. Sapong is quick and will put loads of pressure on a tired Dallas back line. He is prone to some rookie mistakes so Dallas will want to capitalize on that. 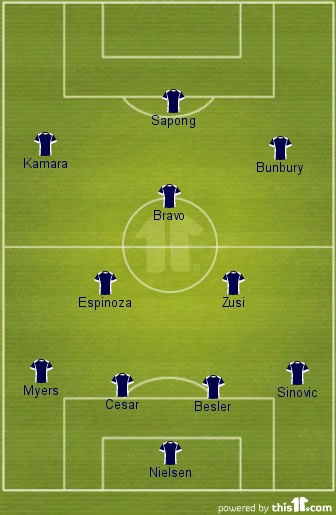 Notes: This is a very offensive lineup but one we'll likely see tomorrow. Lots of speed all over the place and plenty of guys who can score at any point.

Again, it is all about game management for Dallas in this one. Slow it down, possess the ball like crazy, make SKC chase the game and find a way to get a goal early and it will help set up a chance for points in this one. Getting the craziness out of the way in Toronto could actually help as it showed the club that they have the fighting nature in them again to win anywhere and at anytime. This one will be a huge test, no doubt about it, but Dallas has to remain composed and control this one from the start or it could be as ugly as it was in Frisco back in June.