It has already been a banner week for both the Seattle Sounders FC and FC Dallas (and for Major League Soccer really). Both scored big wins in their opening group stage games in the CONCACAF Champions League this past week, though of course Dallas' win was just slightly bigger in the grand scheme of things.

Now the two have a collision course to meet for the first of what likely should be at least three more games. Currently playoff projections have both of these clubs finishing two and three in the Western Conference, which means they'll square off in the semifinal round.

It all starts with a big meeting this weekend in Frisco.

(Read on for thoughts, questions and potential lineups)

1. The dreaded CCL Hangover. Thankfully for both clubs, each should have some level of a hangover from their CCL games. Dallas should be a little more hungover based on how big of a win it was for them (and the league...and US Soccer) down in Mexico. But I still expect some hangover from the Sounders too. While their offense was clicking Tuesday in their CCL matchup against Comunicaciones in a 4-1 win, their offense hasn't really done that in league play in some time. Last week their 0-0 draw with Chivas exposed some finishing problems this club has in the final third against a defense that only seems to do well because of their keeper.

The defense here in Dallas, as we know, is largely better than Chivas or even the last club they beat, Kansas City.

2. How will Dallas cope without George John? This could be a big question on two levels. Long term and for Saturday. I won't get into the long term issues of John heading off to England right now but as for Saturday he's suspended due to a red card. Look for Bobby Warshaw to fill in the back for him, just like he did earlier in the year when John was out for the Houston game (which oddly enough came after playing this Sounders team in Seattle).

Seattle will want to expose the rookie a little more than the Dynamo did in that game. Warshaw is good but as we've seen from time to time he is due for some rookie mistakes. The Sounder's offense has enough firepower to expose that if Daniel Hernandez, Andrew Jacobson, and whomever else in the midfield allows it. Thankfully the midfield depth that Dallas has should make up for the pressure on the young rookie in the back.

3. Getting around the Sounder D. Oddly enough, based on goal differential and all that jazz, Dallas' defense isn't that much better than Seattle's. They do it a little more by committee it seems. Dallas has given up 26 goals on the year, Seattle has given up 27 (though if you take out that SKC game from June, it looks a little better for Dallas).

But for Maicon Santos, Fabian Castillo, Brek Shea and Marvin Chavez, this is a game that could play to their strengths. We saw in Seattle when Dallas won earlier this season that bringing the ball in space and using the speed on the wings does wonders against this Sounder's team. We know their a good team on the road (5-3-5 on the year, one of the tops in the league), so getting out in front of them early has to be a key to this game.

Possibly the best pickup of the season for any club is Rosales. He's done wonders for the Sounder's offense this year when Fredy Montero hides away and fails to produce anything of note. Shutting him down really does help shut down the Sounder offense.

People love this kid and for good reason, he scores goals. Just watch their game in the CCL this past week and you'll know why. 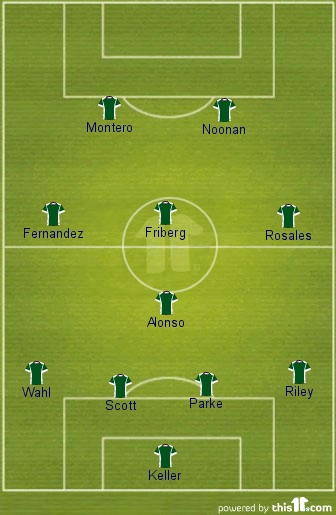 Notes: This is based on last week's starting lineup. Not sure if we'll see any major changes to this though from Sigi Schmid.

For the second week in a row, Dallas should be involved in the game of the week. At least this time around it is at home. Being that it is the only home league game of the month, Dallas has to make the most of this one and get the full three points. August has been a struggle in league play so far, with the team not capitalizing on keeping a lead on the road. Schellas Hyndman needs to get the troops going for this one and earn the three points to help put some distance between them and Seattle (and Colorado and RSL for that matter) in the standings.