Share All sharing options for: Thoughts and Reaction from Last Night's Big Win

FC Dallas is currently headed back to the metroplex with three points after beating UNAM Pumas in an historic win at the Estadio Olimpico Universitario. Some thoughts on the game and then reaction from the press...

El Gato Man of the Match Fantastic performance from Kevin Hartman who was surely the man of the match for FC Dallas. His early stop on a Juan Carlos Cacho breakaway set the tone on what could've been a back-breaking early goal. His decisions on when to come off his line and when to stay in goal were spot on and he was the main reason why FCD kept the clean sheet. Consider the LA game completely forgotten...

Smooth Sailing What an enormous luxury it is for FC Dallas to get three points in what should be their toughest game in the group. Trips to Toronto and Tauro will not be easy, but you've got to think that the 10 point barrier, generally a safe amount to advance in a 4 team group, shouldn't be too hard to attain with these three points in the bag. Getting the points out of the way early would be huge to get the kids some experience and rest the starters later in the group stage.

Mexican attitude They mentioned it on the FSC broadcast last night how Pumas coach Memo Vazquez still didn't look bothered by the fact that Dallas was up 1-0 and Pumas really didn't show a lot in the last 10 minutes to try and salvage the result. You can only beat the team in front of you if you're FC Dallas and I see no reason to temper excitement at all. I certainly hope Pumas sends their starters up to Frisco in a month's time because if they send the same team to Frisco the result won't be as close. As Colin Clarke once said "They brought who they brought and got their asses kicked."

Cruz debut It was a largely quiet starting debut for Daniel Cruz. I really can't remember much of anything that he did all night, though the midfield's role was largely defensive last night. The fact that he doesn't look out of place in just his 2nd week with the team after a full off-season probably shows well for him though.

He's baaaack Fabian Castillo in limited time showed some flashes last night of what we saw early in the season. I expect him to start on Saturday against Seattle and play well. What a huge addition to the team Castillo is at a time where Dallas really needs someone else to step up on offense.

Looking ahead It's out of the frying pan and into the fire for Dallas as Seattle comes to town in just 48 hours for a game that could decide home field advantage for the second leg of a playoff series. Schellas will need to work hard to prevent an emotional let down on Saturday. I'm not worried about the physical aspect as Seattle played with 10 men for a full half on Tuesday in their Champion's League game, but many times you see an emotional let down after a big game like last night.

Obviously most of the reaction is from the Mexican press.

Medio Tiempo writes that the youth experiment for Pumas failed. The article notes that Marvin Chavez celebrated his goal by doing the urinating dog celebration. That wasn't shown on TV, but you've got to think he will be a target in the return leg for some retribution.

They also have a picture gallery up from the match 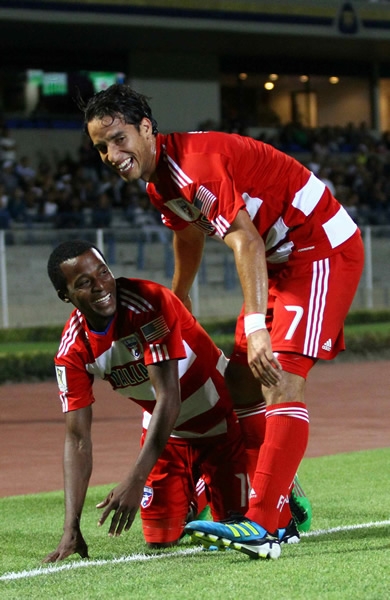 "Yes there is trouble because I do not like to lose against any opponent and buts and did things and we will seek to lift the face, continue to work to think about our next opponent in the league and then the next CONCACAF, the head must be lifted and just look ahead, "said Vazquez.

One game does not tournament make, but it was just the kind of result Dallas needed in this early stage of play, because the Texas team has to play four more CCL games across three countries in the next five and one-half weeks besides fitting in seven MLS games and a friendly against Tigres of Mexico in the same span.

Added Hyndman: "I think we just tired them a little bit with our ability to withstand their pressure. It took an outstanding goal for us to beat a very good team tonight."

And finally the quote sheet from last night

"First of all, I thought it was a very good game. Two teams who had one purpose in mind, and that was to win the game. I thought the officiating was some of the best officiating that I’ve seen. I thought the Pumas team was outstanding. Not only were they talented, technical, but they also played with a lot of enthusiasm. I think we surprised them a little bit with our ability to withstand the pressure and it took an outstanding goal for us to beat a very good team tonight."

On being the first MLS team to win on Mexican soil…
"I’ll tell you the first man who broke the four-minute mile was a man named Roger Bannister. The next week, I think another six people broke the four-minute mile… because they believed in it. For us, for the first team to beat a good Mexican team in Mexico, I hope that more MLS teams will have the same courage to play good soccer and I hope that we continue to find success here."