History has been made! FC Dallas has become the first MLS team to win a competitive game on Mexican soil defeating UNAM Pumas 1-0 at the Estadio Olimpico Universitario.

A hard fought first half ended 0-0 and it was pretty tough to tell if either team would find a goal in the second half. However, in the 65th minute and unlikely hero stepped up as FCD left back Jair Benitez unleashed a low laser from outside the box that cannoned off the post. The rebound fell right to Marvin Chavez who tapped it home to give FC Dallas the vital lead that they wouldn't relinquish.

With the win, Dallas becomes the first American team to win a competitive game in Mexico, something that no one can ever take away from them. The MLS duck has been broken.

I'll have notes and thoughts either late tonight or tomorrow but for now all I can say is....WHOOOOOOOOOOOOOO 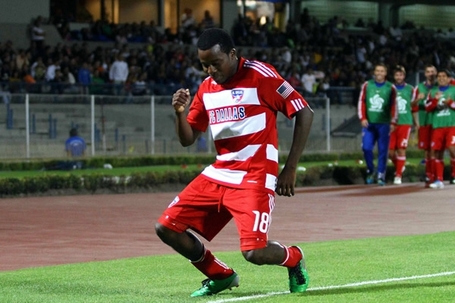