It felt a little weird this week not to have a midweek game. That soon will all change as FC Dallas will be back in CONCACAF Champions League play with a big group game in Mexico against Pumas. But we can't look that far ahead as Dallas will be on the East coast this weekend playing a big match against the Philadelphia Union.

I'll be honest, this should be the big game for MLS this weekend, it's just too bad that there is no national TV for it.

Oh well, this match should be a good one though, even given Philadelphia's recent draws. Dallas is also coming off a disappointing result in LA last weekend so both teams will certainly be gunning for the three points.

(Read on for thoughts, questions, and potential lineups)

1. How will the full week of training/rest/etc. help? For the first time in a couple weeks we should see a fairly rested FC Dallas squad. Good thing too since we need to see more out of newcomers Daniel Cruz and Maicon Santos. I'd imagine having a full week of training with their new team had to help each of them, especially Santos who is at least a little more match fit than Cruz is (his last full match was back in May from what I'm told).

2. Philadelphia has drawn a couple matches in a row here and hasn't looked that impressive, any fight in them? If we know anything about this Union team is that they are a bunch of fighters. When they didn't look great earlier in the season they were still getting quality results in 1-0 wins or draws against top teams like LA. We know this about them, they're good at home. Their only loss was three games ago to the Colorado Rapids (another quality team).

Thing is Dallas doesn't need to take a page out of anyone's playbook on how to beat the Union. They've already done it this season. Withstand the early pressure that Philadelphia will bring and then use the speed of the wings and strong play up top to create chances. Spreading out this Union team is a way to get chances and frustrate them.

3. Who is going to score for the Union? This is one area that the Union have struggled with all year, finding a consistent scorer to lead the charge. Last year we know it all came down to Sebastien Le Toux but that isn't the case this season. Since Carlos Ruiz took off it is now down to some young guns in Danny Mwanga and Jack McInerney. We saw McInerney stop up last week in the draw to the Dynamo but can the young kid continue that form against a stronger defense? I'd like to think he won't be able to.

While the goals haven't been there this season for him, the assists sure are. With eight on the year, Le Toux is still one of the main reasons why this Union team is a good one. Stopping Le Toux usually means you stop this club from scoring or creating quality chances.

I've been a huge fan of Williams for a while now and the Union got lucky when they snagged him for next to nothing last year. Look for him to be focused on shutting down Brek Shea this weekend. That will be a fantastic matchup to watch. 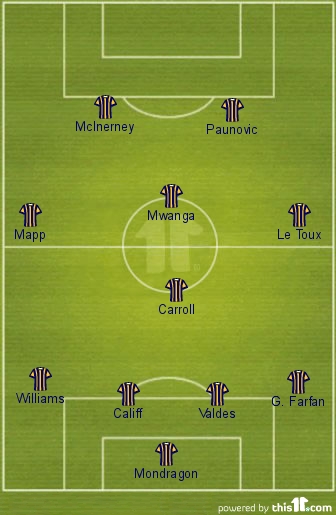 Notes: this is mostly based on their lineup from last week's game in Houston. I see maybe Mwanga starting but that could just be a pure guess on my point. If not him, then definitely Roger Torres.

Last week was a bummer for sure so Dallas has to respond here. A win would be great but a draw wouldn't be the worst thing in the world either. Thing is with Colorado, RSL and Seattle all getting closer in the standings to Dallas, three points are most needed in a weekend like this. Those other three teams have very winnable games this weekend while Dallas has the toughest game on the slate.

Like I said earlier, it comes down to withstanding their early pressure, using the speed on the wings and getting Santos involved early with Shea and Marvin Chavez. Hopefully we'll see the return of Andrew Jacobson in this one, which should help out in the midfield.