This one is always a toughie. Scouting Real Salt Lake seems to get harder each year as this team continues to improve. I know this is one of those games though that I circle on the schedule when I see it. With FC Dallas being as good as they are and RSL being right there with them in the standings, this certainly is a marquee matchup that only gets better each year.

What's funny about this one is we'll get RSL twice here within the next week. The one on Saturday is for three points, next week's is for a place in the semifinals of the US Open Cup.

Oh, the mind games these two will play between now and then will be fun to watch.

When these two last meet it was shortly after each saw their main playmakers go down to nasty ankle injuries. The game in Frisco ended level after a long rain delay. Looking at the two as they come into the match and each are coming off different results from last week. Dallas had their way with the Columbus Crew while RSL struggled in a wild 3-3 draw with New England.

(Read on for more thoughts, questions, lineup predictions and more)

1. How big is the loss of Nat Borchers? With the way Dallas plays up top right now, this one could prove to be huge. While Jamison Olave is brilliant by himself, he pairs up so well with Borchers here that the two of them form one of the best (if not the best) duos in MLS. Split the two up and it can be a different story for RSL. I'd expect Chris Schuler to replace Borchers in the defense. Dallas will want to key in on him and force the second-year defender into early mistakes. Brek Shea and Jackson Goncalves will have to continue to be pests on the wings while Marvin Chavez annoys the crap out of Olave (similar to what Fabian Castillo tried to do in the last meeting).

2. The Rio Tinto factor. While playing in Frisco you get the heat, especially this time of the year. But in Salt Lake you get elevation. Sometimes elevation does a number on a team like Dallas that isn't used to it. Other times its a moot point. Dallas has confidence in playing well at Rio Tinto too. Playing with confidence and gunning for the three points is what Dallas has to do here. With those two games in hand that RSL has over Dallas, getting the three points (or even a draw) has to be done here.

3. The mind-games of the two coaches. Both want to win the USOC and both want three points. I'd expect a couple starters to sit from each side on Saturday to make room for the Tuesday clash in Frisco. Just who won't start on Saturday is the question. We already know about Borchers, which means he'll get rested for Tuesday, but who else? And what about Dallas? We know Schellas Hyndman is superstitious about making changes to his roster when the team is doing well. If anyone gets rested it could be someone like Eric Alexander in place for Ricardo Villar? Who knows, its possible that no one gets rested and then we see similar lineups on Tuesday.

The Costa Rican is starting to hit his stride right now as he's found the back of the net a couple times in the last few weeks. Keeping him at bay will be key for George John and Ugo Ihemelu. Each did a good job of it last time around so hopefully we get more of the same (in other words no goals).

Like I mentioned last time around, RSL doesn't have a roster full of young guys like some teams do in this league. I put Gil here since he is finally starting to get some solid minutes in the league. I thought he looked pretty good against New England last week and it will be interesting to see if he can get on the field for the Dallas game this weekend. 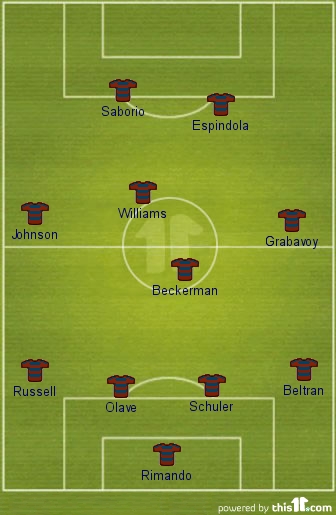 Notes: I know I mentioned Schuler as a possible replacement for Borchers above but we could also see Chris Wingert in there as well. Neither would surprise me. The midfield should look like this, I know last week Beckerman didn't start but I can't see him missing a Dallas game.

It is hard to decide which game is bigger here, this one or the USOC game coming up next week. I'd want the three points in the standings (not to mention the tie-breakers with RSL) but at the same time I'd love to see FCD move into the semifinals of the USOC. Both teams will certainly battle out for the points. This is a mini-rivalry in the making too which will only continue to get better here as we go along.

I think if Dallas can expose the missing link in the defense for RSL with Borcher being out is key. Using the speed on the wings with Jackson and Shea are also big but the midfield has to control the game here. Alexander, Andre Jacobson and Daniel Hernandez all each have to have big games. Defensively Dallas cannot sit back and allow guys like Will Johnson and Saborio to take easy shots on Kevin Hartman either.

I think above all else, getting a point would be great in this game. Three points would be icing on the cake.