A month ago I was out on vacation when FC Dallas last played Chivas USA. Turns out I didn't miss all that much as the boys went to Los Angeles and took care of business in a 2-1 win. That game was really the start of the impressive run that both Jackson Goncalves and Brek Shea have been on. Both tallied goals in the contest.

Chivas has improved since that last meeting though, as they've gone unbeaten so far in the month of July (only two of their games have been on the road though this month and Sunday's is one of them). Last week they got a big win over the Houston Dynamo thanks to a hat trick from Justin Braun.

Dallas as we know has been doing well, despite injuries here and there and having a crowded schedule in July (it won't get any lighter from here out folks if things go well next Wednesday, but more on that next week).

(Read on for thoughts, questions, and potential lineups)

1. Any gas in the tank left? I've been saying it for a while but if there is any team (not named Real Salt Lake) in MLS today that can handle a heavier schedule it is this FC Dallas team. The depth is there and it is showing with guys like Ricardo Villar stepping up and Bruno Guarda kicking in valuable minutes. But the last week and a half has probably been brutal on the club. Going from Frisco, to Toronto, to New York, to Frisco, to El Salvador and back. That's a lot of miles on some older legs and even on the younger ones.

Chivas has to take advantage of the gap in the schedule that they have here. Like most teams they got the normal amount of rest between their last game and this one. Dallas on the other hand only has a day or so to get ready for this one.

2. Does Justin Braun make it two-for-two against Texan teams? Let's hope not. Thankfully with a guy like Braun he does tend to go in and out of games a lot. I know both Daniel and I would love to see him here in Dallas with this current bunch as we both feel he would thrive in Schellas Hyndman's system. Thing about his hat trick last week though was it came at home and against a very inconsistent Dynamo team. Braun was gobbled up pretty well by George John and Ugo Ihemelu last month when these two met.

There is a reason why this guy was named to the All-Star lineup this past week. He's not a true forward in any sense but the guy is dangerous these days. He can score from almost anywhere and he's really helping change this Chivas team into a respectable one.

The former Akron star has had his share of struggles this season but he's starting to come alive in the back four for Robin Fraser. 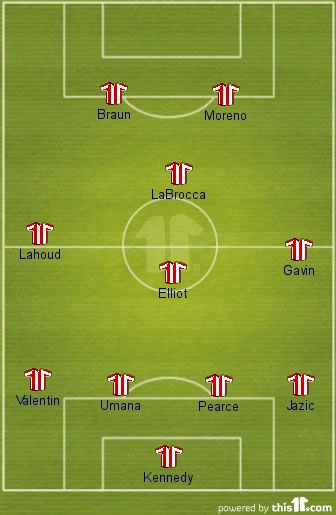 Notes: I'll admit, I could be incredibly wrong with this lineup for Chivas. I'm putting Alejandro Moreno back in the lineup after his impressive run in the Copa America tournament this past month. I think he'll at least see time in this game if he doesn't start. I have LaBrocca sitting behind the two strikers as I don't believe he's a pure striker like the way he's been listed in recent games. He tends to float around more in my opinion. The midfield and back four should be the same as the last game though.

Even with all the travel this is a win-able game for Dallas. Chivas isn't nearly as good on the road as they have been at home over the past month. While they did well in KC a couple weeks back, they did still find a way to cough up the lead late and only get a draw. Robin Fraser has his team playing well though and this team cannot be overlooked at all. The heat could play a factor late in this one which makes me believe the advantage falls back to Dallas.