Earlier today I was perusing various MLS All-Star game Media and I came across the pictures from a legends game played on the Harrison Soccer Courts in New Jersey. Looking at the pictures got me to thinking about how much I would love to see a field like this in urban Dallas. 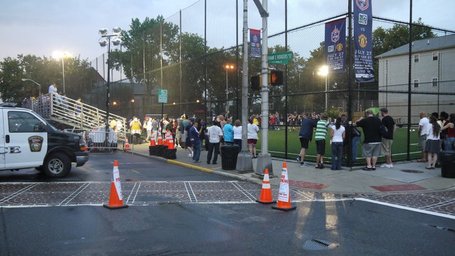 It's a dream that not only I have, but many others around the area and that dream is about to come true through the Freddy Fund.

I would hope that most of the regular readers of this site know all about the Freddy Fund, but if you don't

Freddy Fund's goal was $150,000 to create the urban soccer mecca in Dallas and they're almost there with over $110,000 raised already.

I chatted with Matt Moran, the founder of Freddy Fund, and he mentioned that the money is already there to lay down the artificial field working with a company called urban turf and now they just need the roughly $40,000 for infrastructure around the field namely fencing, bleachers, awning etc...

While these dates are not set in stone, Moran mentioned that the goal is to begin construction around the first week of September and will take around 6 weeks all together.

Once the field is built, it will be used on a reserve basis with first use rights going to the Maple Lawn Elementary School after-school programs as well as America Scores.

Moran said that he hopes the field will become a nightly place for soccer players from all around the area to come and play the game...a sort of urban soccer mecca fitting of Freddy Garcia and his legacy. Something that Dallas has been lacking forever.

Hopefully we will have more great news regarding this project in the coming weeks!