The second game of the week will be a big one for FC Dallas as they head to Red Bull Arena to face the New York Red Bulls in probably the best matchup of the MLS weekend slate. Both teams are coming off midweek matches that went in different directions and each will continue to travel after this match to various places around the globe. Dallas will head to El Salvador while the Red Bulls will eventually head to London for the Emirates Cup after the All-Star game.

Like I mentioned above, Wednesday's matches for these two sides went in different ways. Dallas won up in Toronto thanks to a wonderful Brek Shea goal while the Red Bulls got thumped in Colorado by the Rapids 4-1. If Dallas can use that blueprint that the Rapids used against them tomorrow night, we could see Dallas get three huge points here as we go into the Champions League play-in game next week.

1. Can Dallas use their speed up top to cause issues like Colorado did? If Schellas Hyndman doesn't it could be a long night for Dallas. One thing is certain, as long as New York employs this backline of Tim Ream, Carlos Mendes, Jan Gunner Solli and Roy Miller, there is no reason in my mind that Dallas can't find a way to do exactly what Colorado did with Sanna Nyassi and Omar Cummings on Wednesday. As we all know Dallas has speed to burn and should cause issues with this back four that couldn't handle the duo from the Rapids. Let's not forget too that Dallas is probably a much better passing team than Colorado is too. Seeing how the Rapids carved up passes between Mendes and Ream makes me wonder how much success Shea will have finding Chavez and other guys.

2. Locking down Henry. Even in games where the Red Bulls fail to impress, Thierry Henry finds a way to put his stamp on the game. I'd be willing to say that Henry has not faced a defense like Dallas' yet this season. Teams that have had success against Henry and the Red Bulls this season are some of the better defenses in the league (Philadelphia, Columbus). Controlling Henry and how he gets the ball near the box is key. Plus, lets not forget keeping him away from Kevin Hartman is also key. We certainly don't want to see a replay of what happened last year when these two met for the first time.

3. Depth versus depth. Both teams are banged up a bit here still. New York may be without Rafa Marquez, Teemu Tainio and Luke Rodgers. Its possible that Andrew Jacobson won't start again, and we know that Jackson Goncalves is out of this one on yellow card accumulation. So here it comes, the all important depth battle. On paper the edge easily goes to Dallas but considering the fact that this is a road game all bets are off. I think the team that handles the travel and the weather the best (its going to be pretty damn hot on the East coast this weekend) will come out looking good here.

The league's leading scorer is definitely a guy to watch out for as we all know. He's clinical in his finishing and would love nothing more than to extend his lead in the Golden Boot race.

The second-year defender is still a stud in most folks eyes. He does get caught out sometimes and other times he gets hung out to dry by his fellow defenders. He'll have his work cut out for him with Chavez but I'd expect him to handle that task pretty well 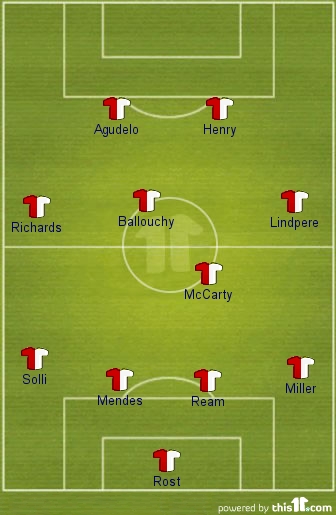 Notes: this is based on their lineup on Wednesday. I'm sure some changes could be made to it too. I'd be sorta shocked to see Ballouchy and McCarty start in the middle together as that combo did not work out well for them defensively.

I'd love to see Dallas get out of New York with at least a draw and a healthy team. I think that is mostly what the fans can all hope for here. Of course a win would be monstrous for the team as they head into the CCL game next week in El Salvador. The lineup selection will be key in this one from Hyndman as he'll probably save a couple players from playing the full 90 minutes in this one.

If Dallas can just use their speed and pressure the back four of New York early and often in this one they should see some points in this game. Controlling the midfield and the passing lanes will be key as well and I like Dallas' chances as long as Ricardo Villar, Eric Alexander and others step up if they are called to in this one.