This could be the biggest scouting challenge to date. Some how, some way, FC Dallas is the team pegged to face a Toronto FC team that has been changed nearly all over. New players in for Toronto will bring either something good for a club that has struggled to put it together for 90 minutes all season, or it will just be more of the same for the BMO Field bunch.

Count them, six, six new additions to this club in the last week (yup, I'm including those two new DPs in this discussion since they can play tomorrow). Just as Schellas Hyndman said earlier in the week on Toronto, go a head and throw the book out on them because we don't know what to really expect out of this club now.

(read on for more thoughts, questions and potential lineups)

1. What will Torsten Frings and Danny Koevermans bring to the table? Designated Players are always risky. Bringing in two 30+ year olds to the mix at this stage in the season is extremely risky for any club. Most Americans should be familiar with Frings and what he brings here. He's bring brought in to close down things in the midfield from a defensive midfield role. The d-mid role in MLS is probably one of the most valuable ones out there. When teams employ the right guy (ie: Daniel Hernandez, Pablo Mastroeni, Osvaldo Alonso, etc.), they see success. It will be absolutely vital that Frings gets accustom to the way MLS games are played, which are fast, physical and rough at times.

As for Koevermans, his stats are impressive indeed but will it translate into impressive stats in MLS. If he can turn into a Eric Hassli-type DP for Toronto then all will be good in the land up north.

2. As for the other four changes, Johnson could be best. I've always been a fan of Ryan Johnson. I really kind of wish Dallas had made a play to get him instead of Maykel Galindo this winter. His speed and nose for goal is very good when he's around the right people. I think he would have thrived here with the supporting cast around him. But enough about how he'd do here, time to look at how he'll do in Toronto. It all comes down to if he gets a chance right away or if he'll be a super-sub for them.

I'd expect Johnson to be one of their speed forwards from the outside while Koevermans sits alone in the central forward role. Teams with speed have done fairly well against Dallas at times this season. Just think to that Kansas City game for a moment and how KC used their formation to break down Dallas with some relative ease that day. I'm not saying it should happen that way tomorrow but it could be a thing to consider looking out for.

3. Getting around the defense. Both Frings and Julian de Guzman should have the midfield in lock-down mode. Key word there is should. This team has had plenty of time off over the last week and a half to get to know one another here. But how well will the back line actually come together with some of these changes. Can Andy Iro make a come back and prove he has a lot to show for? It's certainly possible as I've always felt he had the potential to be a big time center back in MLS. I still believe even with all the offensive-minded changes with this club, the defense is still the weak link. Dallas has to use the outside speed of Brek Shea, Jackson Goncalves and the ball possession of the midfield to win this game.

No change in this for me from the last time I previewed this club. Frei continues to be the most underrated keeper in MLS. How he has put up with the many changes in Toronto this long is beyond me.

This young guy may not start for them tomorrow but expect his speed and pace to be brought in late if the game is tight. We saw what he could do here in Dallas and I wouldn't be shocked if he poked his name into this game too. 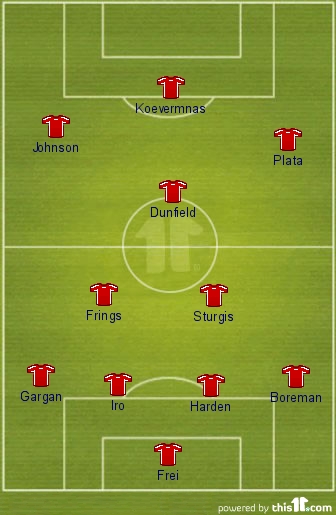 Notes: Obviously this is a pure guess. I've added three of the four traded players in and the two DPs. I don't have de Guzman because he is listed as questionable for tomorrow's game. I have Nathan Sturgis in his place since he has been filling in lately for him anyways. It is the same 4-3-3 we saw last time too. I doubt Aron Winter would break from that formation with the new guys just yet.

Again, we really don't know what to expect from this new look Toronto squad. They could be really good together or they could continue to be bad. We just don't know. I'd imagine the time off between games did allow Winter to break in the new DPs well enough but the new additions from the trades late last week will be tough. Thankfully in their case those players should be already in mid-season form. You don't want to go down early to a team like this to give them confidence either. Get on the boards early and protect the lead if you can. A draw seems fairly likely in this one to me and I'd take any point we can get here.