FC Dallas Should Take a Shot at Kenny Cooper

Share All sharing options for: FC Dallas Should Take a Shot at Kenny Cooper

If you spent much time around the post-game tailgate, much of the chatter on Saturday night was about Kenny Cooper and should Dallas have a go at their former face of the franchise who is now rumored on the trading block in Portland. You'll struggle to find an issue that has the fans more split than this one as it seems to me almost right at 50-50 down the middle as to whether FCD should bring back the team's second all-time leading scorer. I believe it is well worth the risk for Dallas to take a shot at bringing back Kenny Cooper provided the price is right.

After a torrid June where Dallas scored nine goals and won four of their five matches, some fatigue has begun to show on an FC Dallas team that faces the daunting task of midweek matches for what will likely be the majority of the weeks left in the season. Dallas has gotten by offensively by relying on super-human efforts from Brek Shea and Jackson, but with the team getting shutout in their last two MLS games you wonder if that well has dried up a bit.

Currently up top, Dallas has Marvin Chavez, a winger who is playing out of position at forward, providing nothing more than a tireless work rate. Chavez's job is to simply pester the opposing back four constantly while trying to link with attacking players on counter attacks. It's a job that wastes Chavez skill set and forces a guy who is 5'8 on a good day to try and play like he's 6'3. After Chavez, there is Milton Rodriguez whose best days are clearly behind him and Ruben Luna, whose best days are still a bit too far in front of him.

Cooper, signed in the off-season as the cornerstone forward of the Portland Timbers, has failed to impress up north. In 15 starts, Cooper has just 3 goals and 1 assist while leading the team in shots and shots on goal. To simply say "He's been poor for Portland so why would we want him in Dallas?" completely misses the point, however.

Portland has been pretty terrible this season as we saw in the 4-0 meltdown they had in Frisco last month. Cooper, a player who flourishes with good players around him, has been expected to create everything on his own against defenses who are content to double and triple team Chim. It's certainly helped Jack Jewsbury who is having a career season, but for Kenny it's left him devoid of confidence and trying whatever he can to live up to his star billing. This is evidenced by his team-leading 38 shots but just three goals and a spot on the bench. This is where Schellas Hyndman comes in.

Hyndman is a coach that is very familiar with Cooper. Kenny enjoyed his best season as a professional in the season that Hyndman took over, scoring 18 goals, being named to the MLS Best XI and earning Comeback Player of the Year honors. There is likely not a coach in the game that knows Kenny and his many intricacies better than the bus driver. There is also likely not a coach that can get through to Kenny better than Hyndman.

What Cooper needs to be told is that he's coming to Dallas not to shoulder the scoring load or lead the franchise, they've got Brek Shea, George John, and Daniel Hernandez to do that, but to be another piece to the puzzle. Call me crazy, but I think Schellas Hyndman is going to know how to handle Kenny better than John Spencer, a coach that looks to be successful in the future but is still obviously very green at his profession.

Well Dallas was terrible in those years that Kenny played well, you say? Absolutely irrelevant to how Kenny Cooper would gel with FC Dallas 2011 edition. There are two players left on FC Dallas(David Ferreira and Eric Avila) from the squad that suited up against Colorado on June 24, 2009, Kenny's last game in Hoops. Schellas Hyndman did not have the squad to play the way he wanted them to play and he had not yet earned the undivided respect of the locker room like he has now.

I believe this also debunks the argument that Kenny could upset the locker room. Anyone who has spent any time with Kenny Cooper knows that he is as humble of a guy as it gets. Have Daniel Hernandez take Cooper out for a BBQ dinner the night after he gets signed to tell him how the locker room is and you'll never have a problem with the kid. There is an extremely strong backbone of that locker room led by Ugo, Hartman and Hernandez that would never get undermined by one player. Judging how Cooper would play with this Dallas team by how the team played in 2008 is completely baseless.

But Kenny Cooper is too big of a risk to the chemistry of the team on the field right? This, to me, is certainly the most valid point for those who are against bringing Cooper back to Dallas. Kenny Cooper is a guy who will come back to midfield to win a ball and strike on goal from 30 yards out rather than passing out on the wings. However, I believe that we have only seen that Kenny Cooper when he's surrounded by offensively inferior players and he feels like he needs to shoulder the load.

It's certainly been a few years since the Kenny Cooper of 2006-2007, but we also haven't seen Cooper surrounded by offensive players like Brek Shea, Fabian Castillo, David Ferreira(who figured out the league after Cooper left) and Marvin Chavez. Since the mass departure of offensive talent after the 2007 season, Cooper was surrounded by the likes of Jeff Cunningham, who Cooper just never gelled with, Andre Rocha, Bruno Guarda, Arturo Alvarez and Dax McCarty. It was a team that did not play the way Schellas Hyndman wanted them to so he shipped them out of town.

Bring Cooper back into the fold now, in a system that is already set where he does not need to shoulder the load himself, and watch him find success. It's all between the ears with Cooper.

The salary cap hit for Cooper is extremely manageable as well. You may be shocked to know that Kenny Cooper is guaranteed just $267,000 this season, a mere $40k and change less than Uncle Milton Rodriguez. If you can convince Portland to take some of his contract remaining for this season, it's unlikely you would be adding more than $75k to your salary cap for 2012 and beyond given the extreme likeliness of Rodriguez getting cut after this season.

Because of all these reasons, I feel the positives far outweigh the negatives in possibly acquiring Kenny Cooper. The contract extensions of Ugo Ihemelu and Brek Shea, signing of Fabian Castillo and young defensive core indicate that this team is built for the future. It's risky, but bringing in the 26-year old Cooper, a former MLS Best XI forward, at a cut-rate price could work wonders as you have another major piece to the puzzle that would be locked up for years. Signing forwards on the international market is a risky proposition. For every one that works out, you have 3 that are expensive, money-drains on a squad.

If a move for Cooper works out, Dallas has a potentially top-10 forward who is presumably locked up for at least three more years. Kenny Cooper scored 40 goals in 90 MLS games with Dallas and deserves a look if Portland is willing to let him go for the right price. He has the biggest chance for success in his hometown of Dallas, it is a risk worth taking for not only 2011, but 2012 and beyond. 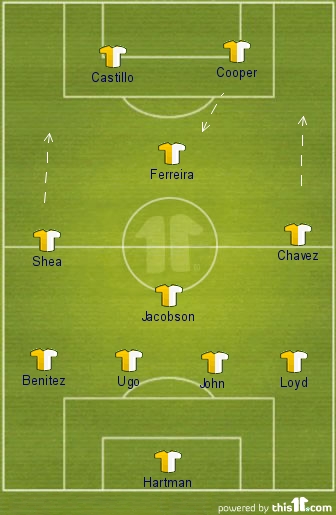 Of course none of this will probably happen and my words are wasted, but hey that's what a blog is for right?