A few weeks ago a DC United game at home seemed like a cake walk to me. But now it won't be that easy for FC Dallas. Big changes to the offense were made when the club dealt former FCD midfielder Dax McCarty to New York for playmaker Dwayne De Rosario (plus the trade with San Jose for Brandon McDonald was a good one too).

With some injuries popping up and a busy schedule this month for Dallas, things don't seem as certain as they would have a few weeks ago.

DC is coming off a big win over New York. De Rosario got the best of his old club. United is 13th in the overall table (for those who like the single table look) and tied for fifth in the Eastern Conference with Kansas City. A win in Dallas would certainly help their playoff chances.

1. Taming DeRo. I think after last week's performance it could be safe to say that DeRo is out to prove some folks wrong. He hasn't had that great of a season here this year but now on his third team in 2011, he could be out to show he finally means business. Dallas has to be in his face all evening with Daniel Hernandez, Andrew Jacobson, and Eric Alexander sharing the load of controlling the midfield.

2. The heat. There is no getting around it, when Dallas is at home they have to use the hot temperatures to their advantage. We saw RSL wilt away on Tuesday and both Portland and Columbus do the same in the last two home games in league play. Loads of possession and lots of wing play to stretch out this young DC team is what Dallas has to do here.

3. The Davies factor. Charlie Davies did little in the first meeting between these two sides but Dallas has to again make sure he's quiet in the return leg. Expect George John and Ugo Ihemelu to share the role of containing him all evening. Keeping the pressure in the midfield will help as well. John and company have to also be mindful of Davies in the box too. We know Davies loves to go down the moment contact is made with him in the box.

DeRo is always a pain for any club. Limiting his touches and forcing him into bad passes will be key. That being said you also have to keep a close eye on Andy Najar.

I mentioned White last time these two faced off. I still believe him in the defense is proving to be a good thing for DC. Dallas can still expose his lack of experience with speed up top but he's done well this season. 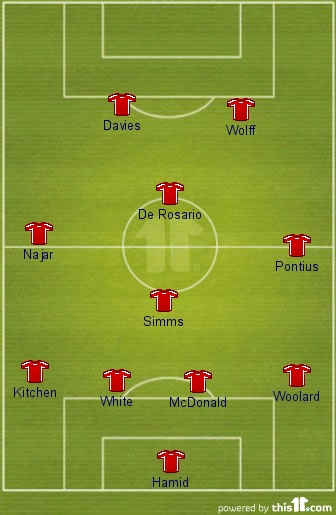 Notes: This is based on their previous lineup against New York. I can't see Ben Olsen changing this right away unless there is an injury or a suspension.

Truthfully, this is a game that Dallas needs to win. With such a big schedule this month, a game against a mid-tier team from the Eastern Conference should be three points. DC has been improving lately but sometimes they take the two steps forward, one step back approach. As long as Dallas uses the speed on the wings and controls the possession in the midfield they should be fine. They drew 0-0 last time out and I can't see it being that way again, especially with the way Jackson Goncalves and Brek Shea have been as of late.