Saturday should be a rocking night at Pizza Hut Park. The club is hoping to have a sell-out for the Pioneer Cup match with the Columbus Crew (yup, I did say sell-out...we'll see). This is the return leg of the series for the 2011 campaign, the Crew downed FC Dallas 2-0 back at the start of April.

That was a game that saw Jackson Goncalves get red carded early, when he picked up two yellow cards within two minutes of one another.

Things have changed for both clubs since that last meeting. Dallas has raced up the standings thanks to strong months in May and in June. Columbus is fighting to stay around in a much weaker Eastern Conference. Recently they have put some quality teams away like Real Salt Lake and the Colorado Rapids, who they down 4-1 this past Sunday.

(Read on for more thoughts, questions, lineup predictions and more)

1. What does Dallas have to do to get by the Crew's defense this weekend? From what we've seen in recent weeks, possession and loads of quality passing seems to do the trick against about anyone. The Crew should be no different in that if you spread them out enough, they'll give up plenty of chances. The Crew may have a tough defense with Chad Marshall and guys like Andy Iro, Julius James and rookie Rich Balchan, but they do give up their fair share of chances on goal. Dallas has to keep the pressure high and expose the wings with Brek Shea, Jackson and Marvin Chavez.

2. Does the Open Cup matches effect this game any? On one side you have Dallas who played eight regular starters in their USOC match on Tuesday against Orlando. The other side you have the Crew who only used a handful of regulars in their loss to Richmond. Reason being, the Crew had a game on Sunday and didn't have enough rest time to use some of their main guys, Dallas did. Really for me, the Open Cup match on Tuesday shouldn't cause any issues for either side. Its possible some Dallas guys could be more gassed from playing a third time in a matter of a week but they've done this enough already this season to be prepared for it. Plus, Daniel Hernandez, George John, and Chavez all rested on Tuesday. Those are three key guys for Dallas and they'll be good to go.

3. Play to the heat. This seems to be a normal comment in these scouting reports but a true one against most MLS sides. It's summer here in Dallas, which means it will be hot at game time. Saturday's high is expected to be in the 100s, so it will be smoking around kickoff. Dallas has to play this to their advantage like they did against Portland, New England and a few other clubs in recent weeks. Use the heat by spreading out the attack and playing the possession game.

Their DP has really come alive in recent weeks, scoring his sixth and seventh goal of the year this past week against Colorado. When goal scorers like this come alive, it is always tough to slow them down.

The rookie has been super impressive and could very well be a dark horse selection for Rookie of the Year when this season is all said and done. 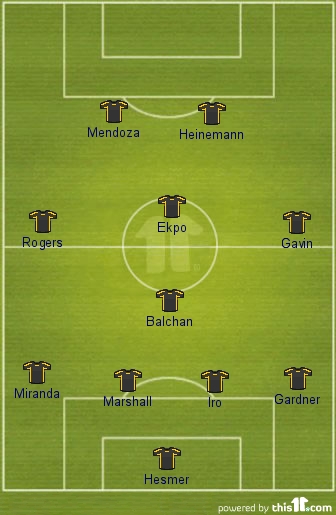 Notes: This is loosely based on their lineup against Colorado. I have Rogers back in the lineup now that he is back from the Gold Cup. If he doesn't start expect Bernardo Anor to be out there instead with Ekpo on the wings. Other than that I don't see much else changing in their lineup here.

This should be an interesting match seeing how both teams have been playing as of late. I doubt we'll see a large offensive explosion from both teams but it wouldn't shock me to see a wild 2-2 or 3-3 game either. The X-Factor in this one will be Jeff Cunningham. We all know he loves to score against his old clubs and he's been waiting all season now to get on the boards and start tying some making some records here. Keep an eye out for that.

Aside from that, this is a match Dallas can certainly win if they play to their strengths. Keeping possession, making Columbus chase and packing on the pressure.