It was the middle part of April and FC Dallas was still in a rut. The Portland Timbers on the other hand were not, they just began playing at home for the first time all season and were making it a frenzy atmosphere inside JELD-WEN Field. FC Dallas came out a bit flat and paid for it early as Portland poured on the goals going up 3-0 at one point.

Dallas at that point had been using Brek Shea in defense and when he moved up into the midfield things finally started to turn for the club. Two goals came late and everyone in Portland thought their three-goal lead was quickly turning into a 3-3 draw before their eyes.

Luck didn't happen that day for Dallas but since that match the club has only lost one game. Portland on the other hand hasn't seen the same success as they did a couple months ago. Dallas owns a 10-point lead in the standings over the Timbers at the moment and hope to extend that lead this weekend when the two meet at Pizza Hut Park.

(So what should we expect on Saturday, click to read more to find out)

1. The result against Chivas was ugly last week, so what can Dallas do to make sure they don't come out flat against Portland again? The biggest thing to remember is that Portland is still an expansion club finding their ways in MLS. They thought they had a bit when they opened up JELD-WEN Field a couple months ago but that is starting to fade a way a little for them as they've dropped some points there now. On the road the Timbers haven't seen success at all for the most part except for a couple of draws. Dallas has to pack the pressure on the Timbers early. Temperatures should be in the high 90s once again on Saturday, so playing to the heat with loads of passes and possession will be key.

2. What is the biggest thing that FCD can do to stop Portland? Simple, limit set piece chances. Jack Jewsbury has proven to be the best trade any club has made this season (yes I'm saying that trade has worked out better for them than the Andrew Jacobson trade here in Dallas). Jewsbury has been clinical on set pieces this season for the Timbers and is a major reason for their success so far. Dallas has to keep Portland away from corners and away from set pieces in the Timber's offensive third. Dallas was able to limit them last time around but paid for it in the run-of-play game, locking down their attack should be better this time around as the defense is hungrier and healthier.

3. Breaking out the speed or keeping the ball? We've seen in some games where speed kills for Dallas and they run all over teams. While other games holding the ball has been the key to victory. I'd love to see a good mix of the two though Saturday night. But I'd also like to see Dallas put away a club like this. Portland proved last week that they can give up an early goal and then come back and score three goals (sure they also gave up two late ones in that wild finish to New York).

Limit his distribution in the midfield and also keep him from being able to have set pieces to take. Just stop this guy all together as he has four goals and six assists on the year (both team highs).

I've been very impressed with this young guy from Ghana all season. I'm sure a couple guys on Dallas will remember his play against them back in April too. 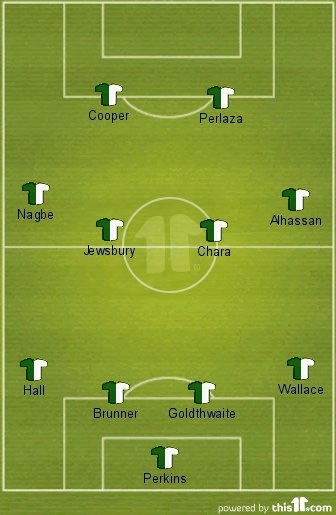 Notes: Just a guess but this is mostly based on their last game against New York. They had David Horst in the starting lineup but Goldthwaite replaced him at halftime. Not a lot of difference than the last time these two met in April really.

We thought the Kansas City game would be a win and that didn't turn out to be the case. But getting another team that doesn't do well on the road like Portland should be a win for FCD. I wrote how this month should be easy points for Dallas and if they can at least make it three of four I'll be happy here. Right now it is time to put distance between themselves and the rest of the conference, three points Saturday night will go a long way in doing that.