Things haven't gone all that well for the New England Revolution so far this season. At the start of the season it looked as though this team would be able to compete in the Eastern Conference but after stumbling through a few games in April and in May it looks like the Revs will have to battle their way through the log-jam that is the East to get into the playoffs this season.

Offensively the club just struggles to put the ball in the back of the net. After 12 games this season, the Revs are tied with Real Salt Lake with the fewest goals scored. On the other side their defense has been leaky at times, giving up 15 goals. Not the worst in the league but certainly not the best.

Leading the way like always for the Revs this season is midfielder Shalrie Joseph with four goals. As he goes, so do the Revs. Joseph had been called to play in the Gold Cup with Grenada but earlier this week he decided to turn down the chance to play in the tournament to stay with his club.

1. Using the heat to your advantage. I think the biggest key to this game on Saturday is possession. With temperatures starting to creep up here in Dallas, and a high expected to be 96 on Saturday, there is no question that the team that does will in possession will have a good shot at winning this game. Sure, possession has been beaten up around these parts lately, seeing how Dallas has failed to possess the ball a lot in recent weeks but against a struggling team like the Revs, FCD will want to make sure they do enough to spread out their attack and keep the ball to make the Revs chase. They're used to this heat while the Revs certainly are not.

2. Who's in the attack for the Revs?  We know about Joseph but after him someone has to step up eventually for this club. The rest of their six goals on the season have been scored by six different people. While it is good to see production out of multiple people, someone has to help carry the weight a little more. Rajko Lekic was expected to help carry the load but his one goal so far in seven games just isn't enough. Dallas will want to keep their strong back line in good standing here against the Revs, who have given them fits in the past.

3. Breaking down the defense. The bread and butter for Dallas is speed off the wings. I'm thinking its nearly time that we'll see Fabian Castillo lined up with Milton Rodriguez up top with Marvin Chavez back on his usual post on the wings. If this is the case, Dallas may stand a better shot at winning some key battles in the Rev's defensive third. New England has been shaky at times in the back this season, especially on the road. Darres Barnes, Kevin Alston and rookie AJ Soares are all quality players but still have some work to do to shut teams down. I look at the loss to Chivas USA a couple weeks back where the defense gave up three goals. Each were due to high pressure by Chivas. Dallas can do themselves a favor by bringing the heat up top.

It's simple, shut him down in the midfield and you'll likely beat this club. Give him space to create and attack and you'll be in a world of trouble.

The rookie has made some mistakes so far this season (but what rookie doesn't fall in their first season), but he's done plenty of good in the games they have won though. 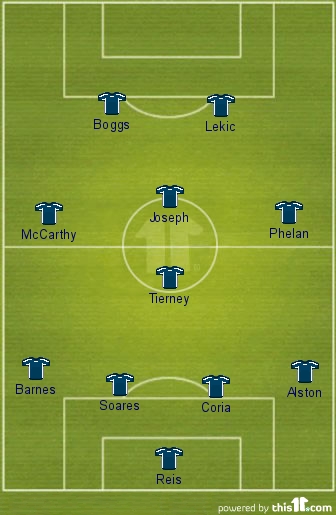 Notes: This is a rough guess...and I do mean rough. With Benny Feilhaber injured (he was called up for the US so he wouldn't have played in this one anyways) it leaves a void in the midfield. Now I've watched the Revs a few times this season and their lineups have changed plenty of times due to injuries so this could very well be completely different come Saturday.

This should be three points for Dallas, anything less would be disappointing based on last month's play and their eight game unbeaten run. Last year in Frisco, these two played a wild 2-2 draw that nearly saw Dallas' unbeaten run end. A flurry of a comeback by Dallas kept that streak intact. Let's hope it doesn't come to that on Saturday. I think maintaining some good possession and getting the attack going early to keep pressure on their defense will be key.

The battle will definitely be between Daniel Hernandez and Joseph in this one, which should be exciting to watch. But as long as Andrew Jacobson helps out and sparks the attack a bit, Dallas should be fine.