Sporting Kansas City finally ended their long 10-game road trip last night as they welcomed in their brand new facility, LIVESTRONG Sporting Park. That place is breathtaking. No detail was spared and it now could easily be the best stadium in Major League Soccer.

But all of that does not matter for Sunday's game. Why? Because Sporting is back on the road to come to Frisco to take on FC Dallas. Ouch, 11 of 12 games to start the season on the road is just brutal.

Kansas City still sits dead last in the league with seven points after 11 games. Their offense at times has looked like it would be tough to stop with Teal Bunbury, Kei Kamara and Omar Bravo leading the way. But after that their club can be extremely frustrating to watch due to their midfield and defense. Injuries may be an excuse in some parts but defensively KC has given up 19 goals this season, tied for third worst in the league.

1. How can FCD stop their three-headed attack? I don't believe KC has faced a defense like Dallas yet this season. George John and Ugo Ihemelu will be presented with a challenge with how KC presents itself on the field. Head coach Peter Vermes comes out with a 4-3-3 and has been putting Omar Bravo in the attacking midfielder role behind the three strikers (Bunbury, Kamara and Ryan Smith). This helps Dallas out in a huge way as even though this attack looks dangerous it leaves huge gaps in the field for possession for Dallas to make KC chase the game similar to how they did against New England last week. Still, Daniel Hernandez and Andrew Jacobson will have to be on top of their game to keep the pressure off the wings with KC's speed. Shutting down the passing lanes will be big but Chicago was able to shut this KC team out and so did Toronto a couple weeks ago. Those two defenses aren't in the same discussion as Dallas' is right now.

2. Beating their defense. I mentioned the defensive struggles this season but they have a couple shutouts in recent weeks to carry them here. Thing to remember is their defense is young. Matt Besler, Michael Harrington, Chance Myers are all young guys in their MLS careers here. Dallas may have a young attack but I'd weight on the FCD experience up top to put a lot of pressure on these young guys in the back of KC.

3. Tired legs. A double week for KC. A Thursday-Sunday swing are always tough on any club. Dallas saw that a couple weeks ago when they had three games in seven days. Its extremely tough when those second games are on the road too. Dallas came out alright after them with points but KC has yet to pull off one of these swings so far this season (that is unless you count the one USOC play-in game that they had days before a trip to Colorado). Dallas will want to use the tired legs to their advantage and make Sporting chase the game. We saw this last week against New England how Dallas held possession and really asserted their dominance on the game.

I nearly went with Bravo and Bunbury here but I think Kamara is just different enough that you have to key on him differently here. His speed and willingness to find the game has been impressive to me in the last two years. He makes plays (and misses crazy chances too) and sets his team up well.

We all know about Bunbury now. He's fast, he can score lots of goals and he's extremely dangerous. 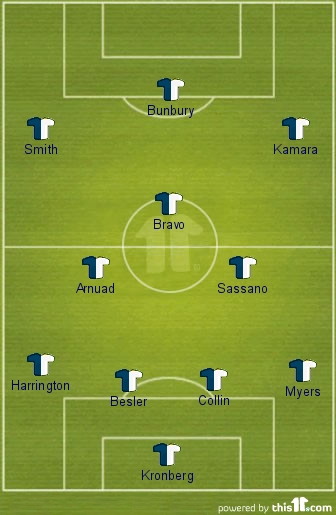 Notes: This is loosely based on last night's roster with the only exception being that Erik Kronberg will be in goal in place of the suspended Jimmy Nielsen. Their 4-3-3 is really offensively based. I do wonder if they'll save Bravo's legs and bring him in late or if they'll go with this from the start. We'll see.

Update: Harrington is out due to yellow card accumulation. And Bravo took a knock at the end of the Chicago game that could keep him out of this one. Either way this club is hurting.

Not to sound like a total homer here but anything but three points for Dallas in this game is unacceptable. Dallas is pushing for the top spot in the overall standings in the league while KC is struggling to get out of the bottom spot. Dallas has to control this game exactly the way they did the New England game last weekend. Stay confident on the ball and continue to push for the goal. The two clubs have plenty of speed so it should be fun to see who comes out firing in this one.