The 2011 Lamar Hut US Open Cup bracket is finally out. The 98th edition of the tournament kicks off on Tuesday, June 14 with all 32 lower division teams competing.

As always the draw was put together to keep teams grouped together based on geography to reduce travel costs. The first three rounds will take place in consecutive weeks, with the Second Round scheduled for June 21, followed by the Third Round on June 28. The eight lower division teams that advance beyond the first and second rounds, will each play one of the eight qualified teams from Major League Soccer in Round 3, scheduled for June 28.

Circle that date for a moment, Tuesday June 28. That's when the games start up for FC Dallas.

(Read on for more on the potential matchups)

While the MLS clubs don't know which teams they'll be facing or where they'll actually be in the bracket, its a good bet that if you look at a map of the US you'll figure it out pretty quickly. The LA Galaxy will likely get the winner of the group of teams that are based in LA; Seattle will more than likely see a the group with the team from Portland (not the Timbers since they lost in the MLS play-in bracket); and the New York Red Bulls will likely have the winner of the group of teams based in New York.

All simple geography for the most part.

But for FC Dallas it may not be so kind. Below are the two groups of pairings that I have a hunch we'll be placed in to face the winner of, one of those I'd love to stay away from. 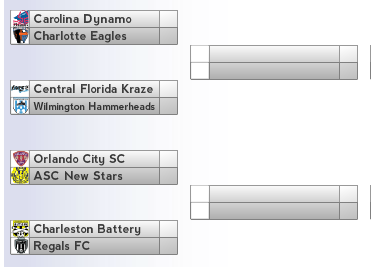 Again it is mostly based on geography for the MLS clubs to help reduce the amount of travel that the "little guys" have in this tournament. My hunch is that Dallas will see the winner of the Orlando City-ASC New Stars/Charleston Battery-Regals FC winner. If you follow the USL-Pro division you may see why I want to stay away from this pairing. Orlando is a beast at the moment in the USL and Charleston is no slouch to this competition, being runners-up back in 2008.

I believe it between Dallas and Sporting Kansas City for these two groups. Dallas will get one winner while Sporting sees the other. What makes it tough to guess at this point is the fact that both sets of matches has teams from Florida. if the top group didn't list a Florida team then it would be an easy bet that Dallas wouldn't be facing the winners of that group.

I think Dallas stands a good shot either way in the USOC this year, as long as they take it serious enough and injuries don't force some of the normal reserves to have to play more minutes in league play than normal.

If my guesses go right with the MLS teams and their pairings and Dallas wins their 3rd round match, they'll likely play Real Salt Lake in the quarterfinals. That won't be easy.