It's been an up and down campaign for DC United so far this season. Either they win big or the lose big. In games that they've won this season they've out scored their opponents 8-2, but in the games they've lost they've been outscored 14-3. The difference is pretty huge.

For weeks they had defensive issues left and right. They're young in the back so that should have been expected. Rookie Perry Kitchen is going to be a solid player in this league but even he still has a long way to go. Ethan White is also a nice player but against more experienced clubs they tend to get lost in games.

But last night's win over the Seattle Sounders FC proved that D.C. can easily do well when they get behind what Ben Olsen is preaching to them. They may have started four players under the age of 20, but in the end it worked.

1. Stopping the Showtime. I kid you not, this is what Charlie Davies is calling the duo of himself and Josh Wolff. Anyways, one thing is true, to stop D.C. you have to put a clamp on their guys up top. In the games that D.C. has lost so far this season, teams like New York and Houston did an excellent job of shutting down the passing lanes to Wolff and Davies and also clogged up the midfield to where they couldn't get positive possession. In other words, Dallas has to slow down the midfield by keeping Clyde Simms and Dax McCarty busy chasing the ball. With those two occupied, it will make it tougher for Davies, Chris Pontius and Wolff to see quality chances.

2. Serving their youth. As we saw last night, D.C. likes to go young. Four players were in the starting lineup last night against Seattle that were under the age of 20. That can be a good thing and a bad thing. Bad as in they could be hungry to prove themselves to Ben Olsen or that they could just be tougher to handle because of speed. The good thing about the youth is, for a Dallas standpoint at least, that they are very prone to mistakes. As long as Dallas maintins the possession game and puts plenty of pressure on their back line with Fabian Castillo, Brek Shea, Eric Avila and Marvin Chavez, there is no reason for Dallas to not see points in this game. Time and time again the United defense has shown this season that their youth has been an issue in the back. Put pressure on them early and it will be even tougher for them to work back into the game.

3. The Dax Factor. It's hard not to preview a game with D.C. and Dallas and not bring up Dax McCarty's name at least once. We know that McCarty knows Dallas and that Dallas knows McCarty. That familiarity factor is meaningless in a game like this to me. What it boils down to is how McCarty really handles this game. Should he want some form of redemption against his former club for just hanging him out to dry like they did at the expansion draft, then you can imagine he'll be amped up for this one. More than likely there will be a little bit of that but knowing Dax he'll be professional about everything.

He's the fell good story of the season so far for D.C. and for the league actually. His league-leading six goals is reason alone to keep an eye out for him.  He has shown the ability already to beat people with his speed and skill and will present a tough challenge for George John and Ugo Ihemelu.

This homegrown product is no Andy Najar but United came away with a nice steal back before the SuperDraft when they signed him to a Home Grown deal. He easily would have been a first round pick and instead D.C. landed him. He's starting to get more playing time here and with that grows this young kid's confidence. He still has a ways to go here but he could easily turn into one of the better defenders in the league before long. 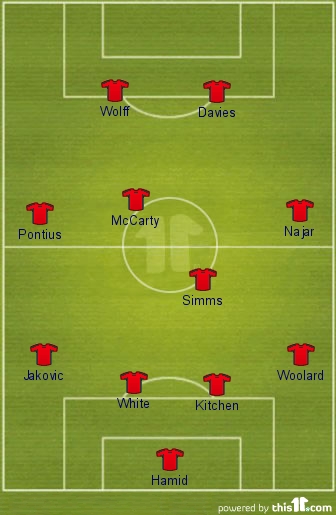 Notes: What is interesting is that their lineup appears to be a 4-4-2 but its typically listed as a 3-4-3 with Pontius in the attack while Kitchen slides into the defensive midfield role with Simms. It will be interesting to see if D.C. goes this young again on Saturday too. I'd imagine Marc Burch could return to the lineup, as could rookie Chris Korb.

Playing D.C. is always an interesting thing. Right now you just don't know which United team you'll get here. Will we see the one that has given up 14 goals? Or the one that has looked well and only has given up 2 goals? Either way Dallas has to get on the attack early as D.C. has given up the most goals in the league so far this season. Their defense has been leaky and will continue to do so until their young players figure this league out. They showed signs of life last night against Seattle but given the fact that the Sounders were missing a good chunk of their attack to injuries makes me think that they'll still be shaky in the back if Dallas tests them early.

The big thing we saw from their loss to New York a couple weeks ago was how New York spread them out in the attack. I think Dallas can do that again here with Castillo and Avila along with the guys on the wings. The key will come down to Andrew Jacobson and Daniel Hernandez in the midfield. I believe those two are coming together nicely here and if they can shutdown the passing lanes from McCarty, Simms and Najar then Dallas could return home with three more points.