So here we are, the big Texas Derby. A lot has gone into this game already between the two club's front offices. Videos, billboards, greeting cards, ads, tweets, and more. You name it and it's probably been said or done between these two clubs over the last couple weeks.

In their last game their offense failed to come alive against the Los Angeles Galaxy. Brad Davis was neutralized very well in the midfield by the Galaxy and he was never able to get the Dynamo offense going on Wednesday night. With his key passes out of the picture LA was able to hold down a slim lead thanks to a penalty kick scored by Landon Donovan right before halftime. The Galaxy didn't have a lot of opportunities on goal but did make the most of them when they got them, something Dallas will likely have to do tomorrow evening.

1. Who's going to score for the Orange? With Brian Ching still out with a plantar fascitis (ouch), the Dynamo have really been turning to rookie Will Bruin, newcomer Koke and Cam Weaver. So far Bruin and Koke have produced here and there for the club but nothing too consistent.

In games against defenses that are good like what Dallas has going, the Dynamo haven't been able to get their offense going largely because their midfield is shut down more. When you shutdown Davis in the midfield you stand a good chance at shutting out their offense. Daniel Hernandez and Andrew Jacobson will likely have to be all over Davis in this one to slow down his passes and limit his attempts of putting balls into the box.

I look at the RSL and LA games for examples on how Dallas can shut Houston down here. Both RSL and LA have tough defenses to get by and the Dynamo were blanked by both.

2. Winning the physical battle. It has been a long week for everyone, not just Dallas but for Houston as well. Both sides have played two games within the last week and tomorrow night's game will be their third in seven or eight days. Short turn arounds for both sides mean lots of tired legs and likely more physical play. You'd expect physical play regardless in a rivalry game but it will be ramped up even more in this one. Tired players are forced into bad situations if they aren't careful and Dallas has to keep their heads on straight in this one. Houston loves to play the physical game regardless of who they are playing. Just a couple weeks ago in Salt Lake they tied RSL 0-0 in a game that saw more fouls than shots on goal. Keeping a cool head will be absolutely key.

3. The young keeper factor. While I think at times Tally Hall has shown he can and will be a top level keeper in MLS, he has also shown some issues in goal. Dallas must put pressure on this young keeper in a big game like this. Take chances like we've seen out of Eric Alexander or Andrew Jacobson and test him from distance. Its possible he could bobble a save and allow the speed of Fabian Castillo or Marvin Chavez to get on the end of a round shot.

I've said for years that Davis is one of the league's most underrated players. Year after year he guides this team with his passing and leadership. He's already gotten six assist on the season and you know he'll be gunning for more in a big game like this one.

The Dancing Bear hasn't done much since his hat trick efforts a few weeks back but even though he is a rookie it doesn't mean he won't score here. Ugo Ihemelu and George John will have their hands full with this kid. 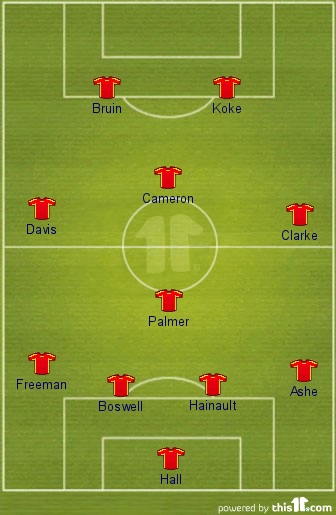 Notes: this is based on the LA game. I can't imagine too much change for tomorrow's game for the Dynamo. The only possible one I can think of is rookie Kofi Sarkodie in the back in place of Ashe? Even that one sounds iffy to me. Ashe is apparently hurt as he picked up a knock in the LA game. From the sounds of things we'll probably see Mike Chabala.

This is a big game, no doubt about it. Dallas has the confidence and the talent to win this one if they play it cool and play to their strengths of their wing play and speed. Houston loves a physical match and will want to be in Dallas's head early on. Controlling the tempo and pace of the game is a big deal for Dallas but also keeping a cool head.

Dallas will need to weather the storm early on and hope they can do what happened in Seattle on Wednesday once things calmed down. Find a way to get Shea, Castillo, Chavez and other involved early and often. Getting the early goal will help too as it did in Seattle but keeping the defense tight should produce a result.