Much like FC Dallas, the Seattle Sounders are missing a key element of their attack right now. When midfielder Steve Zakuani went down with a broken leg a few weeks back, the same week as David Ferreira's ankle injury, many were wondering how Seattle could survive. It turns out, much like Dallas, they've learned to move on while other players have stepped up.

Figuring out the Sounders is no easy task at the moment. Heck, I'd even bet the guys who normally cover the Sounders would admit that without thinking about it. The ever-changing lineup and formation is a result to injuries and some lack of depth in key areas.

But what Seattle is doing well with right now is their defense. The last couple games the Sounders haven't given up much which has lead to some points for the Pacific Northwest side. If anything this will be a big test before Saturday's contest in Houston.

(Read on for more thoughts, questions, and lineups)

1. Getting around the defense. Now saying that their defense has been solid as of late doesn't mean that they aren't going to give up a goal or two here. Over the last few games they've given up four goals (including two in a loss at D.C.). But what has been interesting as of late is the play of guys like Jeff Parke, Patrick Ianni, and James Riley. Nothing great but just consistent enough to get results. Which in this league is sometimes all you can ask for. But the bigger deal is getting around Osvaldo Alonso and Jhon Kennedy Hurtado, you break those two down and you can typically beat the Sounders.

2. The Qwest Field factor. Yes the turf is rather nasty but the environment is one of the best in the league. Players were telling me after Sunday's game that they were excited for this week mainly because they got to go to play at Qwest. But how much of a home field factor does this place really have? To me, its not much of one anymore. Players know what to expect going in and while the turf plays a little fast, most know how to deal with it. Younger players may get caught up in the spectacle of the venue but thankfully for this squad that shouldn't happen this time seeing as how they've already played at Portland and at Vancouver this season.

3. How to stop Fredy Montero? He hasn't been scoring goals left and right like he did when he came onto the MLS scene a couple years ago but he is still extremely dangerous. When he works himself into position he can always be a hand full. Dallas will want to stick a body on him early and possibly be a little physical with him to let him know it will be a long evening. Montero can take his bumps but we've seen before if he gets knocked early he could disappear for the large part of the game. Don't be shocked if Daniel Hernandez puts in a stiff challenge early on him (a clean challenge though of course!).

As I mentioned above he is always dangerous and when given the proper time on the ball he will do something special. Dallas cannot give this guy one inch or it will be like a mile to him on the field.

He's not rookie-young or anything but he's a quality young guy in their defense worth watching. He cleans up the back very nicely and gives Alonso space to do what he does well in the midfield. 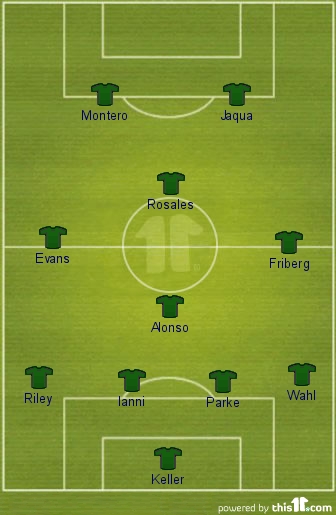 Notes: I'm not entirely sure if I got everyone in the right spot but given the tough call that it is to guess a Sounder lineup right now, this seems like a likely scenario for tonight. They'll run a 4-4-2 with a diamond midfield. We'll possibly see them shift into a 4-3-3 at some point in the second half to mix things up too. Again, all guesses. (And yes this was the lineup the guys at Sounder @ Heart gave me predicted too)

Midweek games are always tricky and with both clubs having short rest in this one and having to play on the weekend, you have to imagine this could be a game where we do see plenty of change in both team's lineups. Don't be shocked at all if Brek Shea is in defense again tonight for Dallas or if someone else gets a chance in the back to start.

It still should be a lively game between these two sides as positioning in the Western Conference is up for grabs. Obviously getting a point of of this game is key but avoiding injuries before the Houston game could be even more valuable for Dallas.