A couple years ago when you uttered the name Real Salt Lake it usually came with a smirk on your face and giggle typically followed. The name alone made some people go "huh?" while their play on the field then probably did little to scary anyone. That isn't the case these days however as former FC Dallas striker Jason Kreis has built a real winner in Salt Lake City with RSL.

After winning their first MLS Cup in 2009, RSL dominated their way through the 2010 slate and fell just short of winning the Supporter's Shield behind the Los Angeles Galaxy. As we all know what came next in the playoffs when they came to Frisco and Eric Avila put home the go-head goal in the series that helped Dallas move on (yeah I know there was a trip to Sandy in there).

RSL didn't have a lot of offseason time to waste as they were still in the middle of the CONCACAF Champions League knockout round. Just a couple of weeks ago they carried the hopes and dreams of all MLS clubs in that tournament into the finals against Mexican side Monterrey. After a hard fought battle RSL came up empty-handed in their pursuit of CONCACAF glory.

Flip the page on the story and it goes from bad to worse. Midfield general Javier Morales went down with a nasty ankle injury a couple weeks after that final and now RSL is trying to figure out life without him for now. Last week against the Houston Dynamo, their offense lacked a punch as there was no one there to carry the load like Morales does in the midfield. Plus it doesn't help that Alvaro Saborio hasn't found his scoring touch from last season.

(Real on for more thoughts, questions, potential lineups and more)

1. How can Dallas continue their hot streak at home against RSL? RSL has never won at Pizza Hut Park and I know many of you would like to keep it that way. I've seen RSL play at PHP many times over the years and really only last year was the first time I thought they'd break through and get a win. Turns out that wasn't the case. This year when David Ferreira went down with an ankle injury I thought it would definitely happen. But with the injury to Morales the field is level again. Both clubs sit next to one another in the standings right now (though RSL has a couple games-in-hand on FCD) and each will want to keep pace with LA.

So how does Dallas continue this hot streak in league play and against RSL? Simple, control the tempo from the start and do not allow RSL to play their style of game in the midfield. Schellas Hyndman knows the little things to do to find results in games like this and I'd imagine he'll have a trick or two up his sleeve. Maybe the return of the Butter Leather jacket? Or possibly finding a way to expose the RSL defense through Fabian Castillo, Marvin Chavez and Brek Shea. Those three have to have a big game.

2. Who is taking over the Morales role? Last week against Houston it was a mix of Andy Williams coming off the bench for the final 30 minutes and second-year youngster Collen Warner. Without Morales the possession went down as Houston was able to use their physical power in the midfield to dicate the game. Williams was probably more dangerous late in the game than Warner was for the 60 minutes he was out there. Dallas will want to keep the high pressure in the midfield on either one of these two on Sunday. No doubt Andrew Jacobson and Daniel Hernandez will want to put their stamp on this game early, given the way those two played against Philadelphia last week, they certainly will.

3. Getting through their defense. You thought getting through Philadelphia was going to be a challenge last week, well RSL will be an even bigger one. RSL has only given up two goals all year in the seven games that they've played. Grant it they've only been on the road three times so far and their lone loss is on the road in Portland (no one is winning there this season it seems). Their two wins on the road came in New England and at San Jose. Neither should be surprising wins. Getting by their defensive wall of Nat Borchers, Jamison Olave, Chris Wingert and Robbie Russell won't be easy. Dallas has to use their outside pressure and force free kicks here and there. When Dallas scores it typically comes from the wings anyways so they'll need that outside pressure to be on it's A-game on Sunday.

Dallas fans don't like Beckerman, and I'm sure he doesn't like Dallas fans. Still, he's a major reason why they are so good. I'd be willing to bet that RSL would have won the CCL final had he not been suspended for the final leg at Salt Lake. He's so valuable to the way their midfield moves and directs the game.

RSL isn't that young of a team these days so picking a young player that actually provides any sort of impact on the field can be tough. But Warner is a guy that sees plenty of time on the field regardless of big injuries like the one to Morales. I'd imagine he'll be starting again on Sunday in that role and will have to be the main catalyst to their offense. 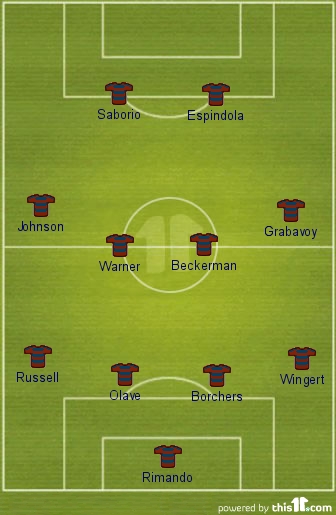 Notes: Espindola is still listed as questionable for this match. If he doesn't go, I'd imagine they'll stick former FCD midfielder Arturo Alvarez. They could also go with Andy Williams in the midfield in place of Warner but for now I'm going with this guess. Either way its still a very deep and dangerous lineup to deal with.

I know the LA-Chivas game will get a lot of hype and love this weekend from the press but there is no doubt in my mind that this should be the showcase game of the week in MLS. It's a shame that national TV didn't pick this one up to start the year. Even without Ferreira and Morales it will still be a fascinating game.

I'd imagine it will be a close game from start to finish as RSL will want to get points in Dallas for a change. FCD will need to keep the pressure up that we saw against Philadelphia. If they can involve Shea, Castillo and Chavez early, it could turn into points. The battle however will come down to the midfield and its a push for me at the moment. A lot will fall on to Jacobson and Hernandez, those two have to control the tempo of this game and keep the pressure off the back four of Dallas.