Share All sharing options for: Behind Enemy Lines: Scouting Philadelphia

One thing we know about the Philadelphia Union this season is they are a team that does not break down easily. Nearly all of their games have ended in a 1-0 result, outside of a couple 1-1 draws. They either lose a game 1-0, or win a game 1-0. So figuring out which Union team will show up in Frisco tomorrow night may not be the easiest thing in the world to figure out.

Talking with a friend that live in Philadelphia that actually writes for the Union yesterday, I got the sense they don't even know what to make of the Union here as we enter week nine.

The thing that is dangerous to see if you are a FC Dallas fan is the emergence of second-year striker Danny Mwanga in the last couple weeks. He bagged his first goal of the season Wednesday night to salvage a 1-1 draw with the Los Angeles Galaxy. Him along side former FCD striker Carlos Ruiz and Sebastien Le Toux make a very tough group of attackers to put up with.

Defensively the Union are miles better than their expansion season from a year ago. The biggest difference is the leadership in the back with Carlos Valdes and keeper Faryd Mondragon (gotta admit, I love that last name).

1. How does Dallas deal with Ruiz, Le Toux and Mwanga? You'd think that those three combined would be lighting up the boards this season but they certainly are not. Mwanga and Le Toux each have one goal on the season and Ruiz only has two. The biggest stat for me is the lack of assists this club has gotten so far this season, only one, yes one assit on the year to Mwanga. That is crazy. But Dallas can't back off just because this group hasn't been on fire yet this season. Mwanga showed Wednesday night that he may be finally ready to burst onto the scene here this season and begin scoring up a storm. The thing Dallas needs to be concerned with here tomorrow night is preventing the amount of service these three get and give out. One thing is clear to me about Le Toux compared to his numbers last year, the guy just isn't getting the same service and in return isn't able to give the same back to his partners.

2. Breaking down the defense. Right now Valdes, Sheanon Williams, Danny Califf and whoever they stick in the other outside back spot (either Jordan Harvey or one of the Farfan brothers), this group has been a monster in front of Mondragon's net this season. They are gritty and physical and will likely put a beating on guys like Marvin Chavez and Fabian Castillo. Dallas has to do what they do best, spread out the attack with Brek Shea and Chavez and pressure the living crap out of this back four. They are prone to mistakes at times but so far this season few have pounced on them. Getting guys like Califf and Valdes in card trouble early would also be a positive sign for Dallas. They are both guys that will foul a lot and it could be an item to keep an eye on here.

3. Short rest for both. The short rest between games is a concern for both sides. Each have will be playing their third game in eight days or so but for Dallas having the last two of those three at home is nice. For Philly, its a little tougher to gage. Away from PPL Park this season the Union haven't been nearly as good, which is typical for most MLS clubs when they are on the road. The picked up a win in Houston to start the season against a Dynamo team that had zero offense to start the season anyways. Their losses in LA and in Portland showed how to beat them though. Pressure the crap out of them until they break on a free kick or on a long possession spell. Dallas should be a bit more rested considering they've been home all week while the Union had to travel today for tomorrow's game. Fatigue could be an issue tomorrow night for the Union and if so, Dallas needs to take full advantage of it.

He's still their main guy on offense, no mistake about that. When he has the proper service out of the midfield, this club is extremely dangerous. We saw that last year and you know it's only a matter of time before a team gives the Union the proper time to get Le Toux really going here. I think once he and Ruiz figure each other out things will take off for them on offense.

It kind of obvious to place him here but after the other night, he looked like the 1st overall SuperDraft pick that he was a year ago. Dangerous on and off the ball, pressuring the defense, and put in a full effort to get a goal to get his club a point. 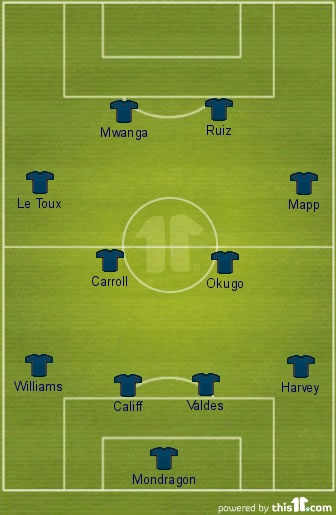 Notes: Figuring out their midfield is pretty rough at the moment. From game-to-game it seems to change. For instance against LA Mwanga started on the bench and came on in the second half in the attacking midfield role. Against Portland however it seems like their lineup looked more like the one above with Brian Carroll and Amobi Okugo in the center of the midfield. Once thing to watch out for is Mondragon, he picked up a little bit of a knock against LA and is listed as probably for this game. I'd be shocked if he didn't play but should he not be clear to go tomorrow night it would mean the first start for rookie Zac MacMath. That would be a big deal for Dallas.

We know without David Ferreria, that Dallas will likely end up being in a lot of 1-0 games here. Against Toronto the other night it was pretty apparent that it was going to be like that all night. The offense is there for Dallas but the final finish on the ball just isn't. Defensively both of these teams matchup very well with one another, each are playing at a high level at the moment so it will be fun to see if either can break the other down here. More than likely this will be a 1-0 win or loss for Dallas or a 1-1 draw. Nothing else. But I also wouldn't be shocked to see both clubs open this game up and have a wild scoring affair.