I wish I knew what to really make of Aron Winter's Toronto FC team here. The start of the 2011 season has been somewhat unkind to the Reds but that is what you'd expect from a team that is rebuilding more than most clubs in this league. While TFC sits a point behind FC Dallas, most pundits around the league would agree that they aren't nearly in the same discussion for being a playoff contender like Dallas is.

So far this season has been a mix of up and down play from Winter's team. At BMO Field, the Reds are a different side, nearly all of their positive results have come from their friendly confines. Away from BMO Field is another story, the club sits 0-2-1 with a draw at San Jose as the only positive point outside of Toronto.

But one will have to admit, things looked different over last weekend against the Houston Dynamo in their 2-1 win at home. Sure the Dynamo were on a rough patch that saw them lose two straight games last week but give credit to the Reds for finding ways to win. Rookie Joao Plata was the guy who got them going offensively as he scored on one goal and assisted on another. Good luck finding him out on the pitch though, his 5'3" frame is one of the smallest in the league.

1. Beating Tchani and de Guzman. Ever since the trade of Dwayne De Rosario, newcomer Tony Tchani and Designated Player Julian de Guzman have formed a nice partnership in the center of defense. These two haven't had a lot of time together on the field but in the two games or so you are already seeing a tougher defensive team out of Toronto in the midfield. Together, both are coming along in the way Winter probably wanted all along, a slow build from defense to offense. Toronto has looked drastically different in the defensive side of things because of these two (and their centerbacks aren't half bad right now either). Dallas will have to find creative ways to get around these two in the midfield by spreading them out in the attack. Using the wing play is vital as always here for Dallas.

2. Who will score? Plata? Someone else? Right now the Reds aren't consistent in their attack. Either it's Plata or Alan Gordon, or Miacon Santos. None are consistent with their scoring and a lot of that deals with the lack of a creative player in the midfield. I still believe that until they get a true #10 like a David Ferreira, they'll struggle with their attack. But as for tomorrow goes, Dallas may have to contend with shutting down the little rookie, Plata. He's a shifty little guy that will be a handful to deal with.

3. What to make of the defense? I mentioned it is getting better because of their midfield duo of Tchani and de Guzman but still there are some concerns in defense for Aron Winter to sort out. Go back to the Seattle game a couple weeks ago and this club was entirely overmatched in defense. Richard Eckersley, Dicoy Williams, Adrian Cann, Mikael Yourassowsky are all recent starters for this club in front of Stefan Frei, but none really strike fear in a lot of teams around the league. Cann is the main guy in the back but pressuring him has to be a big thing for Dallas. Should Schellas Hyndman start Fabian Castillo up top again tomorrow, you should expect to see Cann cover him a lot, but Castillo's speed may be the deciding factor in that battle. Right now, I honestly don't think the Reds can hang with Dallas's speed on the wings and in the back.

You'd think it would be their DP, de Guzman but it isn't. Frei keeps this club in games more so than most keepers do around the league. I often wonder what this club would look like without him in net, its a scary thing really.

I've always been a big backer of this kid, from his college days to when he was drafted by New York. He didn't get his shot in the Big Apple but he's now getting his time to shine in Toronto. Toronto is immediately better in the midfield with him too. 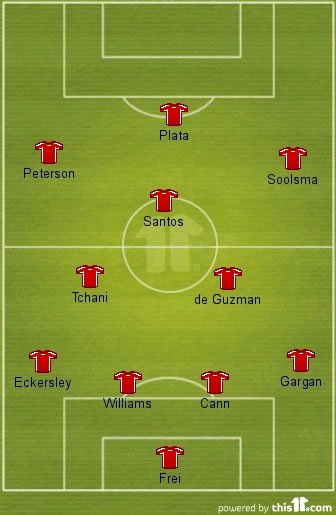 Notes: This is a rough guess at their lineup based on their last couple games. Last week they appeared to have a 4-4-2 with Plata and Nick Soolsma up top but they've also gone out with a 4-3-3 with Santos sitting above Tchani and de Guzman. Neither lineup would shock me here, the 4-4-2(ish) lineup worked for them last time around so it may be a case of don't mess with what worked. We'll see.

This is a game Dallas needs to win, let's make no mistake about that. Toronto is a gritty team but not a great one. Based on the way they play away from home it would be silly to think that Dallas doesn't come away with three points in this one. Toronto did look much better last week against Houston but they've never done well at Pizza Hut Park so why would they start now?

Winter is putting together a solid team though and that is tough to ignore. I love the midfield combo of Tchani and de Guzman and I do think that will cause some problems for Dallas in the midfield. As long as Dallas stretches the game out and uses their wing play they should come away with three points in this one. But like Daniel said earlier, it's hard to tell what kind of lineup we'll see tomorrow night.

It is a big week for Dallas and getting off to the right start before the Philadelphia Union come to town on Saturday would be a nice thing.