I'm trying to stay on top of things this week with another Friday contest on the schedule. This week of course is a big one, the MLS Cup rematch between FC Dallas and the Colorado Rapids.

Scouting the Rapids has been interesting. Boy, this club is deeper than ever this season as Gary Smith has done a great job getting deeper at all positions. I felt before the season they had a lot to prove as MLS Cup champions and so far they have not let up for a moment. Three games, three quality wins and eight goals in those games.

You'd thought Omar Cummings and Conor Casey would be doing all the offensive work again this season but so far guys like Jamie Smith and newcomer Caleb Folan have really stepped up to provide a nice punch on the offensive end. Folan continues to be a nice find by G. Smith here this season.

Defensively the Rapids are just as strong as they were a year ago when they rode their defensive strengths to a MLS Cup win. Drew Moor and Marvell Wynne continue to be a nice combo in the central defense behind veterans Pablo Mastroeni and Jeff Larentowicz. Their wing play has also improved a lot this season with the additions of Sanna Nyassi and the improving play of J. Smith.

One thing is for sure, these Rapids mean business and will be a tough test Friday night for FC Dallas.

1. Slowing down the attack, can it be done? So far in three games Dallas has given up five goals that could have all been avoided. Mental mistakes have cost FCD points so far this season in the back and going against an attack like the one Colorado uses, overcoming those mental mistakes is vital. If it isn't Cummings's speed, its Casey's physical presence on the field, or now Folan's ability to break free, or even J. Smith's ability to shot from distance.

Slowing down Colorado means being physical in the back with their guys up front and using your wing players to put pressure on their wing players to track back. If Dallas gets into a possessional game, which they will in this one since Colorado loves to have the ball as much as Dallas does, then beating Colorado on the wings has to happen. Plus, that whole mental mistakes issues has to be corrected as well...but that goes without saying.

2. Are the Rapids really this good? To be honest they have only played Portland (an expansion team at home), Chivas USA (one of the worst sides in MLS right now) and D.C. United (a team that never does well in Colorado). You could argue that their nine points is a result of a weaker schedule to start the season. By contrast though Dallas had a fairly easy start to their schedule with Chicago, San Jose, and Columbus but failed to do anything with it.

But short answer, yes, the Rapids are really this good. Watching them against D.C. last week proved a lot to me about them. They mean business this season and are hellbent on proving everyone wrong about them. That comes straight from the top with their manager.

3. Can Dallas win with their speed and attack? If you look at the number of chances Dallas has had on goal this season, there is little doubt in my mind that before long those SOG will turn into actual goals. Soccer can be a cruel sport at times when quality chances aren't producing actual goals. All that needs to happen is for Dallas to continue to get chances on goal with Milton Rodriguez, Ruben Luna, Fabian Castillo, David Ferreira or whomever. Quality chances will turn into goals before long.

I never expected to be talking about him in this manner before the start of the season but so far he's exceeded a lot of expectations around him. He's scoring quality goals from the midfield and proving you have to mark him if he is in space. I know Cummings, Casey, even Folan are just as important but the play Smith has provided from the wings this season for Colorado has been so big this season. I'm not saying if you shutdown Smith, you shut down the Rapids but I am saying he's so underrated it is scary.

At 22-years old he's really one of their youngest players who actually sees playing time. For a veteran squad that speaks highly of how valuable he is to the club off the bench. His speed burns teams and that is the kind of thing that could scare the Dallas defense late if things aren't going well Friday night. 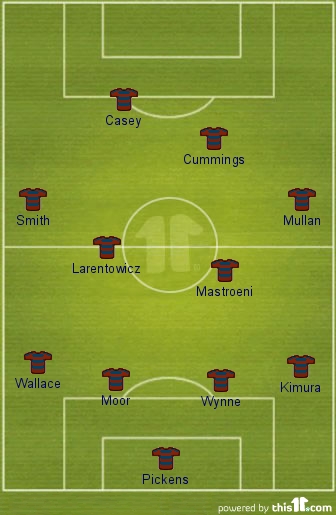 Edit: Take Casey out and sub Folan in. Apparently per a comment below Casey is out for Friday's game.

The way things have gone this season, a game against a quality side like Colorado couldn't have come at a worse time for Dallas. You definitely don't want to back your way into a big rematch like this but that is just where Dallas is at the moment. It is possible Dallas plays up to the level of competition for a change and gets a result. Obviously a win would be great to see but a draw is probably expected given the way the club has played so far this year.

Colorado is a deep team that is well coached and will be ready for this one. Dallas can't afford any mental mistakes in the back or any more stupid red cards. Daniel will preview later this week the how's and what's of the game for Dallas but for me its all about overcoming those mental mistakes and actually finishing the chances they get on goal. The game will take care of itself after that.