The Los Angles Galaxy come into Pizza Hut Park this weekend as the top club in Major League Soccer. Well, if you look at the standings at least. Having played a couple more games than most clubs, they've been able to gain 15 points after eight games. Good but not nearly great like we saw from them in their first 14-or-so games last year.

The Galaxy have looked better in recent weeks as Landon Donovan, Omar Gonzalez and other key players are finally healthy here. Bruce Arena has had to do some shuffling of his lineup to make up for injuries to players but judging by their past couple of games, he's finally getting a lineup that can win plenty of games this season for him.

Last week against the Portland Timbers, the Galaxy came out firing early. Char Barrett (yes I am writing his name as a goal scorer believe it or not), scored one of the prettiest goals you'll ever see while Landon Donovan put in a pair of his own to beat the Timbers 3-0. Their attack looks dangerous with Donovan back on the score sheet. Also having guys like Juan Pablo Angel doesn't hurt either.

(Read on for more thoughts and questions)

1. Putting pressure on them early. From what we've seen so far this year, at least using the Real Salt Lake game as an example. To stop LA's attack, you must contain their front two in Angel and Barrett (or Miguel Lopez, Mike Magee, etc.). RSL did a great job getting out after LA early on, scoring two goals in the first 10 minutes of the match. LA over the last couple years hasn't been a club that does well in coming from behind. So getting on them early usually proves success.

2. What will Beckham bring to the table? With Beckham going to the Royal Wedding today (boy I'm glad that nonsense is over), he'll be heading back to Dallas on a quick trip either tonight or tomorrow morning to catch with his club. Beckham is used to flying all over and playing games after long flights so his mind should be fine, but his aging body may not be. I think if Dallas wants to put their mark on this game, they'll need to force Beckham into mistakes early to get him out of the match, mentally, as soon as they can.

Plus, not giving up silly free kicks in their defensive third will be key. Dallas hasn't shown the best ability yet this season to defend set pieces. If we know anything about LA and who they have on the field, their set pieces will be a big key to their game come Sunday.

3. Using speed. While I think the Galaxy defense has gotten better about handling speed, this is a big weekend to show that Dallas still has the wheels on the outside to beat anyone, even without David Ferreira leading the attack. If you recall the Western Conference finals match at LA last fall, you should remember how well Dallas executed their speed on the outside with Marvin Chavez and Brek Shea. Getting those guys involved early will be huge. I think LA can handle some speed but I don't believe they've seen a speedy team like Dallas yet this season. The speed they have seen like against RSL, they proved to not be able to handle it so well.

It really should come to no surprise why Donovan is their key player here. His speed, skill and leadership are enough reasons to list him here. And after last week we know he can score again. He's dangerous every time he touches the ball and Dallas fans know all too well about how good he can be at Pizza Hut Park.

Watching this young Brazilian early on this season showed to me he is a star in the making for sure. His early season goals for the club were nothing short of brillent. While most clubs will focus on Donovan, Beckham, Angel and other big names, its Juninho who usually finds himself in space with confidence to take a long shot to test a keeper. Dallas cannot give up any extra room to this kid in the midfield or else they'll pay for it. 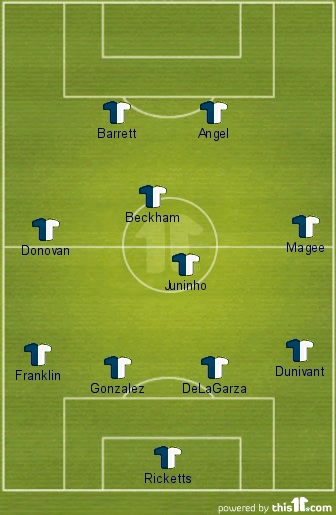 This won't be an easy one for FC Dallas, that we know. Not having David Ferreira in the lineup will change a few things as to how Dallas moves the ball through the midfield to the attacking third of the field. As long as Dallas maintins possession like they do and create quality chances on goal they could force Donovan Ricketts and the Galaxy defense into some mistakes. Getting on them early will be the best chance of winning this one or else it could be a long evening at Pizza Hut Park.

I think Dallas has a shot in this one if they can be calm and cool and not allow the Galaxy to play their dump and run style of play that we've seen out of them over the years. Dallas hasn't proven they can handle the counter attacks so far this season and giving up set pieces will not be an option in this one. LA is too good at winning corners and free kicks as well as scoring off of them that it will cause problems for the Dallas back line.

I think getting a draw would be a huge thing for Dallas but right now I'm feeling a close loss is more in the cards here. We've seen Galaxy games be high scoring affairs in the past at PHP but I'm not counting on that again here this weekend.

Be sure to come back on Sunday as we'll have live coverage of this game for you here on Big D Soccer.