A new feature we're going to have on here from time to time is something called the 50-50 ball where Drew and I take each side of a controversial issue facing FC Dallas. Today and tomorrow  we will tackle what FCD should do without Ferreira.

There have been hints and teases at this for a while now but due to the unfortunate injury to MVP David Ferreira, FC Dallas could possible find themselves in a situation where they could, at least temporarily, switch to a new formation.

Yes, the 4-1-4-1 is the formation of choice for now but a 4-4-2 could likely be in the future for FC Dallas. I know there is the old motto "if it isn't broke, don't fix it," but right now could be time to try. Schellas Hyndman has long talked about his desire to eventually have a 4-4-2 formation with this club and I know from talking to him that it's been a goal of his since day one. He just hasn't wanted to change this formation because of Ferreira and how well he's worked in the 4-1-4-1.

Now that Ferreira is out, it could be time to experiment with it. The loss of Ferreira isn't the only reason to consider a change though. I see a few other reasons to make a switch and even with Ferreira gets back he could slide into the formation without too many issues.

(Read on for more)

Biggest reasons for the switch, outside of Ferreira for me are as follows:

Brek Shea on the wings. I know I've preached high and low how Shea is a natural for being a defender but I'll admit, he's far more dangerous to this club as a wing player in the offense. He still does a great job getting back on defense when he's needed to and we know Hyndman can put him in defense in a pinch if players get hurt. Let's also put it in another light, the one and 1/4 games that Dallas has had Shea on the wings the club has scored four goals, the other four and 3/4 games without him on the wings, the club's scored four goals. I'm not a rocket scientist but it appears the club does better offensively with Shea at left mid.

Fabian Castillo up top. He's still young and a tad raw but Dallas brought him in to score. Let's not ignore that fact. He wasn't brought in to play on the wings every weekend, he was brought in to be as a striker and that is where he truly belongs. Hyndman placed him on the wings to start just so he could get his feel of the league and it was probably his best way to adjust to his new surroundings the quickest.

I can't see him being a great lone striker so a 4-4-2 system allows him to be at his best with his speed and to put pressure on the other club's defense with that speed. His skill set with his feet also allow him to need a partner that can control the tempo of the play and allow him to break free in the box.

Ferreira is the main cog in a 4-1-4-1. With him in this current system he runs the show but without him in it, Dallas doesn't have the backup in place right now that is on the same planet as Ferreira in terms of running the show offensively. Eric Avila and Ricardo Villar seem like the most likely replacements for Ferreira in the lineup today but neither are going to do what Ferreira does best, be dangerous in attack and find others in space the way David does. Plus I'm not totally convinced either would do a decent enough job tracking back on defense as Ferreira does.

I look back on a lot of Avila's game-winners and it seems a decent chunk come from Ferreira. You just can't replace an MVP that easily.

Its been there before. In scrimmages that didn't involve Ferreira, Hyndman typically put out a 4-4-2. The team knows how to play within a system like that and could adapt to it quicker than any other out there.

On the flip side. Naturally there is the worry about the defensive side of things in the midfield with this kind of formation. Daniel Hernandez, while great, cannot cover the entire field the way he used to and would be exposed a bit more in this formation. I do agree with that kind of statement to a degree but I see the defense getting better each week behind him. I don't think exposing Hernandez in the midfield a little more will free up space to put more pressure on the defense behind him. George John and Ugo Ihemelu are both getting back to full strength and are nearly there in my eyes. Jair Benitez, Jackson and Zach Loyd are all solid on the outside backs for now so my worries about Hernandez may not be as high as it is for other folks out there. The depth is there to relieve Hernandez off the bench with guys like Andrew Jacobson (if he doesn't start already), and even other guys like Jackson sliding up into that role.

So what do I think a possible lineup could look like as a 4-4-2? 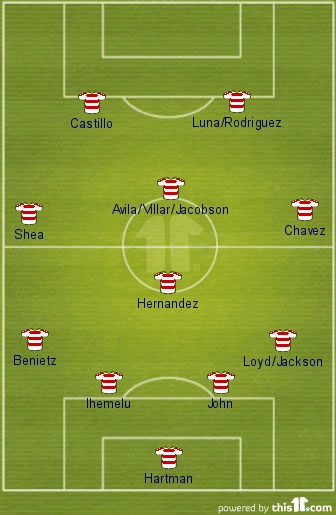 Obviously I have a few options out there for the attacking midfielder position. You could go a little more defensive with Jacobson or even Eric Alexander (hey remember that guy?). But the national position for guys like Avila and Villar is this attacking-mid spot. Up top you'd see Castillo with either Ruben Luna or Milton Rodriguez. Either I'd be fine with, more than likely Rodriguez would be the first pick to start in this situation but I wouldn't mind seeing Luna either.

Defensively we shouldn't see too many changes. The only toss up is still between Zach Loyd and Jackson on the right back spot. You could make your case for either one to start at this point. I'd prefer Loyd but I also saw plenty of value in Jackson against Vancouver this past weekend.

So what you do you all think of a switch to the 4-4-2? If there was ever a good time to do it, it would be now. Would you make the switch? Let's hear what you have to say. Tomorrow Daniel will be giving you all reasons to stick it out with the 4-1-4-1. Be sure to check back here for that.