Share All sharing options for: Behind Enemy Lines: Scouting Portland

This week has been fairly busy for both Daniel and I. He's had Dallas Cup duties to attend to, while my day job has been taking over in a big way (thankfully it dies back down next week). But enough about our boring lives, it is time now to scout the enemy for the next FC Dallas game, which happens to be this Sunday in Portland at the newly refurbished JELD-WEN Field, or PGE Park for you old USL folks out there.

So far the expansion Portland Timbers have gotten off to a rough start. In their first three games they got smacked around by the Colorado Rapids and beat up a bit by Toronto FC. They did finally show some signs of life in their last game against the New England Revolution when Jack Jewsbury tucked away a game-tying goal to give the Timbers their first point in Major League Soccer.

Most folks (including myself) thought going into the season that the Timbers would be the expansion team to watch because of their offense. Having names like former FCD striker Kenny Cooper, a rookie like Darlington Nagbe and old USL goal scorers like Eddie Johnson, Ryan Pore and Bright Dike meant this club would be good. Well so far it's been three games and only two goals. Yeah, not so great. But let's also face the facts too, we knew going into the season the defense would be a tad on the leaky side too. So far they haven't seen their starting keeper (Troy Perkins) or their backup (Adin Brown) stay healthy enough to go 90 minutes.

(So what should we expect on Sunday, click to read more to find out)

1. Rest a factor? On one side of things Dallas will come into this one with plenty of rest. They will have had a full week of practice to prepare for this one after their 3-0 win over the Colorado Rapids a week ago. Portland has a little different factor to deal with. They have had plenty of time off lately to prepare for their game with the Chicago Fire but they end up getting a quick turnaround for the Dallas game. Usually teams having to do a double in one week fair worse than the teams that only play a single game. Turnarounds from Thursday to Sunday are the worst too. Basically Portland will have to hope none of their main starters catch and injury or a dumb red card against the Fire.

2. Home field advantage. You'll see tonight what I am talking about with JELD-WEN Field being a great place to play. The atmosphere there will rival some of the best in the league and I'd imagine it will be extremely loud there. Should Portland fail to beat the Fire tonight, the pressure to get that first win will be really high come Sunday, making the home field advantage less of one in my book.

Then there is the turf factor and what it poses to guys like David Ferreira. We'll know tonight how the ball plays on it and whether or not its like playing in New England or if it is like playing at the old Rice-Eccles Stadium in Utah.

3. Can the Timbers' defense stay with the speed of Dallas? Portland has some speed of their own on the outside. Guys like Rodney Wallace, Sal Zizzo, Nagbe are all quick. But all are young and less experienced when going against the likes of Brek Shea, Zach Loyd, Castillo and Eric Avila (I'm guessing Marvin Chavez sits this one out). Dallas is just as young as Portland on the wings but the difference is the experience factor. Plus, I'm not a huge fan of what Portland has in the middle of the park just yet. They'll need someone to hassle Andrew Jacobson into a silly foul early and someone to put Ferreria off the ball as much as possible. I just don't think they have the resources to do so just yet.

I think it goes without saying that Cooper has to get going here in order for the Timbers to be successful. Cooper was always a better scorer at home so I'd imagine he'll do well in Portland once he gets someone like their new DP (signed yesterday) feeding him the ball.

He wasn't their top pick for nothing in the SuperDraft. Most folks expected him to go to Vancouver, instead Portland got lucky and landed him. Nagbe has been hounded by an injury so far this year but he seems to be getting back to full strength here. They'll need the most out of him to put pressure on the Dallas back four. 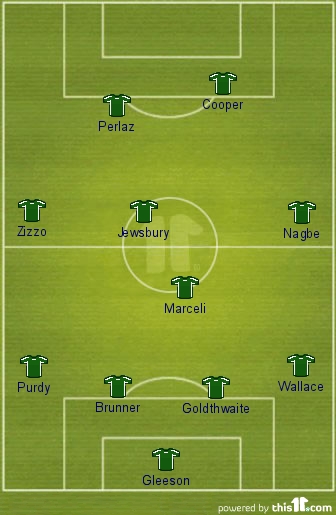 I know Portland will be a tough place to play in. As long as Dallas stays out of the ref's book with cards and continues to keep long spells of possession they'll be fine for this one. So far Portland hasn't shown that they have the quality to hang with any of the quality teams so far. We'll know a little more tonight about how they do at home though. I know the home factor will be good for them but Dallas has done well in tough environments before (think RSL in the playoffs last year). Sunday should be no different.