Share All sharing options for: A little bit more on trialist/signing Bruno Martins 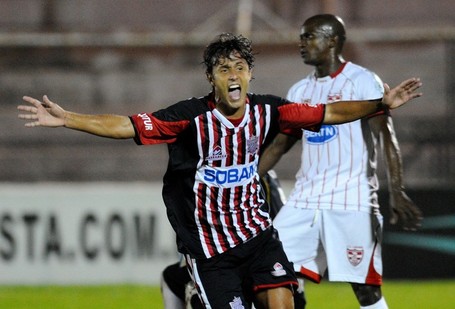 This Bruno Martins "trial" is looking more and more like a signing. It's surprising as this has slipped everyone's radar, myself included, as there was a few different stories out of Brazil talking about Martins going to FC Dallas back in early January. So who is Bruno Martins de Jesus and where does he come from?

The Sao Paulo state championship is probably the biggest in Brazil and features big teams like Corinthians, Botafogo, Sao Paulo, Palmeiras and Santos. Paulista is certainly not up to that standard, but they are generally a mid table team in this state championship finishing between 6th and 15th in the last five years.

Keep reading for much more information on the new Bruno including youtube, where does he fit and more

While you have to take every situation with a grain of salt(remember Aziz Ansah from last year who was supposedly a new signing and was cut before the pre-season is over), it does look like Bruno Martins is more than just your every day trialist who will be gone after a couple of weeks and it's highly likely he makes the team as a two-way midfielder. In fact, this story out of Brazil says he has signed a contract with FCD through 2014. This story has some quotes from Bruno on the move.

So where does he fit? Well it looks like Bruno Martins is a two-way midfielder that will challenge Eric Alexander for the starting spot. Ricardo Villar looks to be more insurance/relief for David Ferreira at the top of the midfield while Martins will be in the Dax position in front of Daniel Hernandez....I don't want to get too excited about any player after looking at a youtube clip, but for those of you who remember, tell me this guy doesn't remind you just a little bit of Juan Toja...you can certainly see why Schellas likes him, good technique, high work rate and a decent free kick taker.