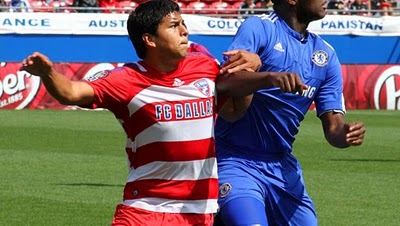 I'm extremely happy to confirm that the FC Dallas Academy will be returning to the 2011 Dr. Pepper Dallas Cup XXXII for their second consecutive appearance in the Super Group.

Last year at Dallas Cup XXXI, FC Dallas faced off against Chelsea FC of England, losing 4-2 in an extremely tight game, losing to CF Monterrey of Mexico 2-1 in another great match and defeating Alajuelense of Costa Rica 2-1.

Those who were there last year will remember Dallas Cup XXXI as somewhat of a coming out party for Ruben Luna on the big stage, scoring a fantastic goal against Chelsea and providing wonderful forward play throughout the three games. In Dallas Cup 2011, look for homegrown players like Bryan Leyva, Victor Ulloa and Jonathon Top to mix with the academy team.

The 2011 Super Group will continue the Dallas Cup tradition of fielding the most talented international yout teams in the world with Arsenal and Barcelona confirmed to be making their first trips to the famous tournament as well as the return of Corinthians. The full Dallas Cup Super Group should be released in the coming days and I can tell you there are multiple MLS academies that will be coming to Dallas this year.

FCD vs Chelsea highlights start at 2:10