With the NCAA College Cup happening in Alabama this weekend(Including FCD Academy product Boyd Okwuono with UNC), I was thinking about if FC Dallas could field a team of homegrown talent that would give most of the major college programs a run for their money. Call me a homer, but my answer is yes. Here is my FCD Homegrown starting XI, in basically the same formation that the first team uses. 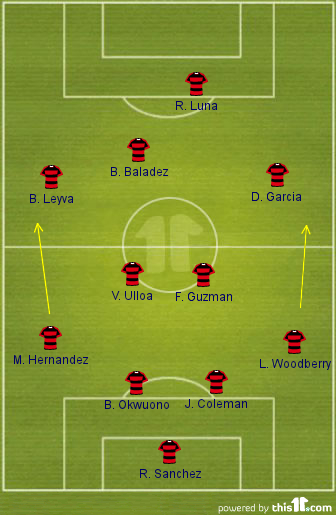 Comments and the bench after the jump

This lineup is absolutely led by the solid defense. That back four would be just about as good as any in college soccer right now. Hernandez gets forward very well on the left though I struggled on which of the three other defenders to put at right back. Coleman is a center back that reminds me a lot of Drew Moor while Okwuono has size and positioning beyond his young age. I haven't seen Woodberry in a few years though I hear he's been playing center back at Maryland. I liked him when I saw him at outside back so I put him there.

The midfield is marked by very good speed and skill from the outside wingers. Guzman and Ulloa are extremely similar players so they could struggle a bit together, but there's somewhat of a lack of a good defensive midfielder in the system. Ulloa would play a little in front of Guzman. I also considered moving Jack Coleman to defensive midfield in place of Guzman and bringing in a different center back.

The attack has Bradlee Baladez playing off of Ruben Luna with Baladez using his size and speed to shrug off defenders. In a perfect world, long balls would be played to Luna who holds them up with Leyva, Baladez and Garcia rushing in from deep to create a devastating counter attack similar to what we see from Dallas when Ferreira, Shea and Chavez are rushing at defenders.

The bench would consist of:

Jaime Ibarra(GK) - The starting goalkeeper at SMU, a potential pro prospect, had 2 shutouts in the Conference USA tournament that SMU won.

Michael Ambrose - A glue guy that can play at either outside back or outside midfield. Current member of the U18 Academy team, committed to Maryland for the fall.

Mark Ashby - Good young center back, tall kid who is committed to Harvard for 2012. Gets forward well and scores a good amount of goals for a center back.

Chris Figueroa - 2-way midfielder spent his freshman year at NC State before transferring to SMU. Sitting out 2011 due to NCAA transfer rules.

Jonathan Top - A forward cut in a similar mold to Ruben Luna. Big and strong for his age, holds the ball up well but needs to increase his speed of thought and play. A major prospect for the future who still needs time to gain experience and confidence.