The final week of the regular season is here. Kind of hard to believe huh? It seems like ages ago when we looked at the San Jose Earthquakes for the first time. Here we are at the end of the season and it is time to look at them again as FC Dallas travels out to the Bay Area to take on the Quakes in the season finale.

Both teams have gone in separate directions over the course of the season. Both had injury issues but judging by the injury report today, San Jose has a few more injuries on the list to deal with. Dallas is hoping to use this game to possibly give some key players some rest and set up a potential playoff run.

(read on for more thoughts, questions, and potential lineups)

1. Again it comes down to stopping Chris Wondolowski. If you haven't noticed by now - or even when he played against Dallas the first time this season - but Chris Wondolowski is a pretty darn good goal scorer. He's only got the Golden Boot to play for this season and you know he will be going after it in full force tomorrow night. He's scored seven goals in his club's last eight matches, a pretty decent hot streak.

No matter who Dallas throws out there in defense, they have to stick to him like glue. Last time around when these two faced off there was still some injury concerns in the back. Now that George John and Ugo Ihemelu are healthy (at least for the most part), they should be able to match up against him and slow him down.

2. How is San Jose's current form? It isn't that bad really. One loss in their last five games but only one win at the same time. They haven't lost at home since early August, so that will be something to consider as they close out the season at home. Their last couple games have been against some quality teams and their lone win however did come against the lowly New England Revolution.

Dallas is coming into this match on a two-game winning streak in league play. Decent wins over Chicago and Vancouver helped push the Red Stripes into the playoffs for the second year in a row.

3. Go for it all or hope for a RSL loss. That is the big dilemma tomorrow night for Schellas Hyndman. Do you rest the starters - most of who played on Tuesday in the CCL loss to Toronto - or do you put in some younger guys for the season finale and hope for the best in the RSL game. It is a tough call as you want the best 11 that you could possibly have for the playoffs - which next week could be a two game week. But at the same time you want that three seed and that extra bit of rest. There could be a fair amount of scoreboard watching tomorrow as the RSL game is earlier than the Dallas game in San Jose.

Like I said, seven goals in the last eight games. Find this man and stay on him or else he will make you pay all night.

The second-year defender leads the team in assists this season. Not bad at all for a late-round draft pick. 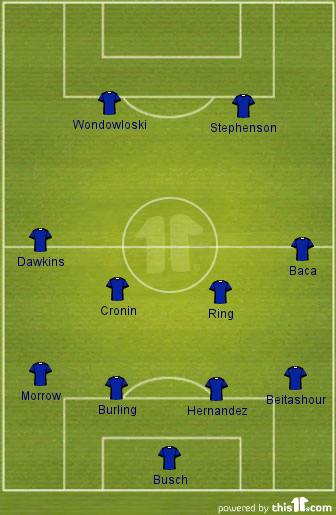 Notes: Going off the game notes here for this one. Like I mentioned above, they are pretty banged up at the moment in terms of injuries.

I have a feeling Hyndman will go for it tomorrow night and hope that RSL draws or losses at home to Portland. In a way you have to considering that getting the wild card means adding an extra game (even if it is at home). I think avoiding the wild card round at all cost is key at this point. Dallas needs the rest for some guys like Brek Shea, Marvin Chavez and others. It will be interesting to see who gets the start up top with Jackson Goncalves out on suspension. Does Maicon Santos get the nod or does Hyndman go to Ruben Luna for a change (game notes had Maykel Galindo, so take that for what it is worth).