Bobby Rhine and Oscar Pareja Inducted Into Walk Of Fame

Share All sharing options for: Bobby Rhine and Oscar Pareja Inducted Into Walk Of Fame

The 2011 inductees into the Walk of Fame were announced Saturday before the Vancouver Whitecaps-FC Dallas game. In a small ceremony by the club, current Academy coach Oscar Pareja and former broadcaster Bobby Rhine were inducted into the WOF.

(Read on for info on the two) 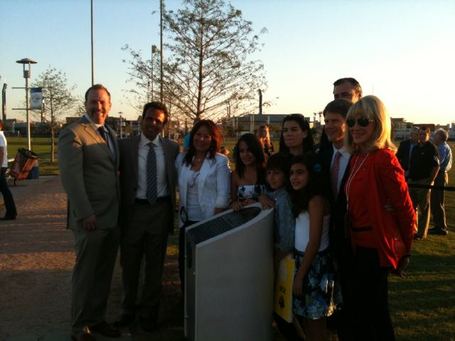 Bobby Rhine spent more than a decade with the organization both as a player and member of the front office. After ending his playing career following the 2008 season, he remained as a key figure with the club making valuable contributions in both community development and broadcasting. Bobby was selected in the First Round (sixth overall) in the 1999 MLS Super Draft. During his career, Rhine appeared in 212 games for Dallas, making 136 starts and playing more than 12,000 minutes. He scored 23 goals and recorded 34 assists. His goals total is good for eighth all-time in the FC Dallas record books, while his assists total ranks fourth behind Jason Kreis, Oscar Pareja and Ronnie O'Brien. Following his playing career, Rhine retired to the broadcast booth serving first as the team's color analyst before switching to play-by-play duties prior to the 2010 season.

Oscar Pareja is both the FC Dallas director of player development and head coach of the club's academy and MLS Reserve teams. A two-time MVP for the Dallas Burn and a member of the 2001 MLS Best XI squad, In addition to representing his home country with the Colombian National Team, Pareja enjoyed a professional career spanning two continents and lasting 18 years. In addition to playing for Independiente Medellin and Deportivo Cali in his native Colombia, Pareja played for the New England Revolution and Dallas Burn (now FC Dallas) in Major League Soccer. As a coach, Pareja has twice (2008-09 and 2009-10) been named the U.S. Soccer Development Academy Conference Coach of the Year and once named Academy Coach of the Year (2008-09).

ABOUT THE WALK OF FAME

The Walk of Fame is a stretch of soccer history at Pizza Hut Park that spans approximately 1,400 linear feet and includes commemorative markers with plaques recognizing members of the soccer community and key events that have been instrumental in helping build the sport of soccer in Texas. Situated just north of the Pizza Hut Park stadium, this unique landmark is not only a tribute to those who have dedicated much of their lives to the sport of soccer, but is also a point of historical interest for all fans visiting the facility.