Well Wednesday was fun wasn't it? Finally getting the monkey off the back was a huge thing for FC Dallas. The playoff berth is now clinched and with this game against the Vancouver Whitecaps and the one following week against San Jose, it will all be about playoff positioning.

With an all important CCL group stage finale set for next Tuesday at home against Toronto FC, I'd bet Dallas will have to play this game a bit wisely against Vancouver. Rest some key players maybe, or at least only play some key players in smaller minutes. You know Toronto will be doing the same in their game in Philadelphia this weekend.

1. How to contain Camilo and company. Vancouver has been a much better team over the last month or so. Oddly enough, they are no longer the worst club (points wise) in the league. A big reason for that is because interim boss Tom Soehn is finally playing striker Camilo like he should. The young Brazilian has been let loose in the last few matches and the goals have been coming in. In their last couple matches Camilo has been the reason why the Whitecaps have knocked off Real Salt Lake and DC United. Thing is, Camilo hasn't seen a tough defense like Dallas since the Whitecaps last played someone like Seattle or LA. Against quality teams like that he has been shut down and so has the Whitecaps offense. Dallas will need to play smart, decisive defense tomorrow night to keep him, Eric Hassli and rookie Omar Salgado at bay.

2. What has been the difference in the back lately for Vancouver? It is pretty simple, since the return of Jay DeMerit in the back, the Whitecaps have been a better team defensively. DeMerit alongside Alain Rochat have made a world of difference for the Whitecaps in defense as of late. What can cause issues for them though is speed - something Dallas has plenty of with Jackson Goncalves, Marvin Chavez, Fabian Castillo and Brek Shea. Using the speed on the wings will pull these guys out for the Whitecaps and cause them to have to play up in tempo.

3. Fixture congestion. We're back at this old hat, three games in a matter of four games in a matter of a week and a half. Thankfully, now that Dallas as secured their spot in the playoffs, the worry is a little less than it was a couple weeks ago. The offense is final back on track. How Schellas Hyndman deals with having a third game in less than a week next Tuesday will be interesting to watch. Hopefully Shea sees minimal minutes tomorrow night, same for Daniel Hernandez. Those two are more key to a win on Tuesday against Toronto than a win over Vancouver tomorrow.

I'd rather have this game against Vancouver be a solid mix of young and old. Give guys like Bobby Warshaw a start in the midfield with Andrew Jacobson. Or maybe go a little different with a 4-4-2 and have Maicon Santos up top with Fabian Castillo. I see this game as one that can get guys minutes and others rest.

The defense runs so much better with him back there. At this point they are building for the future and this veteran is a key part of that.

Camilo has been killer as of late, 12 goals on the year have in firmly in the Golden Boot race as well. 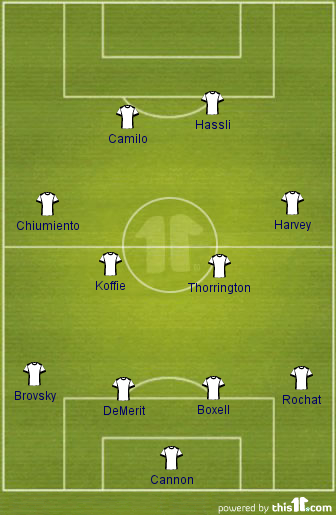 Notes: This has a few changes from their roster on Wednesday against DC. I think David Chiumiento will be back in the lineup which could help boost their attack. The middle pairing is really a toss up in my mind, John Thorrington or Peter Vagenas with Gerston Koffie. If Chiumiento doesn't get the start then look for maybe Camilio in the midfield with Long Tan or Mustapha Jarju up top with Hassli.

Now that the playoff berth is secure and that worry is out of the way, Dallas can focus on finishing strong. I do still see this as a game that Hydnman can rest some key players for Tuesday's important CCL match. I was shocked - like many of you - to see Shea out on the field for even a second on Wednesday against the Fire. I assumed he would sit that game out all together and maybe play some on Saturday against the Caps. But we were all wrong now weren't we?

Dallas should win this one with whatever lineup Hyndman puts out there, the likely mix of young and old should be enough as Vancouver hasn't proven that they can win on the road at all here this season (0-11-5 away from BC Place or Empire Field). A draw wouldn't be the worst thing to happen, just as long as no key player gets injured for Dallas ahead of Tuesday's game.