Man, it seems like ages since the last Brimstone Cup game. A lot has changed between the Chicago Fire and FC Dallas since that late March match, but one thing is certain both clubs need a win. As it has been said across many circles, Chicago has to win out to reach the playoffs while Dallas just needs a win or a draw (with some help of course on that one).

A lot is riding on this match tomorrow night in the Windy City. The Brimstone Cup, the rivalry, the playoffs, getting the season back on track, and so much more. Three months ago if you had asked me or Daniel if we were worried about the final stretch of games against the Fire, Whitecaps and Earthquakes we would have said no, but now, with all the losses that have piled up we can't take anyone for granted.

1. With no Marco Pappa and potentially no Dominic Oduro, who does Chicago lean on? The Fire will be without a big chunk of their offense tomorrow if Oduro doesn't get over his cold (dude was running a fever of 105 yesterday, yikes!). Even if Oduro can go you have to wonder what effect that cold will have on him. What this means is the Fire will need someone else to step up. Someone like Pavel Pardo, Deigo Chaves or Patrick Nyarko. They should have Sebastian Grazzini back which will be good for their offense. Dallas will have to clog up the midfield and control the possession game in this one to keep Chaves, Nyarko and others off the board.

2. With the loss in Seattle last week in the USOC final, what will that let down do to the Fire? This one can go one of two ways, either the Fire will be pumped up to get over the loss in the USOC final or that loss will signal their doom as they close out the season. Like I mentioned above, the Fire have to win out here. There is no getting around it really. Some teams handle losses in games like that very well but others tend to let it effect how they play for a few game after it. Dallas has to capitalize on it and hope that they can catch a letdown from the Fire in this match.

3. Where oh where is the offense? So many blanks on the goals scored department over the last month for Dallas. In fact Dallas failed to score a single goal in league play last month. Yeah, no goals at all. Something has to give, someone has to step up either be Fabian Castillo, Maicon Santos, Ricardo Villar, Daniel Cruz, Marvin Chavez. Someone just has to hit the back of the net again for the club. Hell, I'm sure any of us would take a goal from even Kevin Hartman at this point. The club is due for a goal, it should come in this game.

Boy is Nyarko underrated for the Fire. He leads the club with eight assists on the season and is a big reason why their offense keeps them in games. Shutting him down and taming guys like Pardo will go a long way in getting points in this game for Dallas.

The rookie has been really solid all season long in defense. A huge reason why the Fire are even in contention at this point. 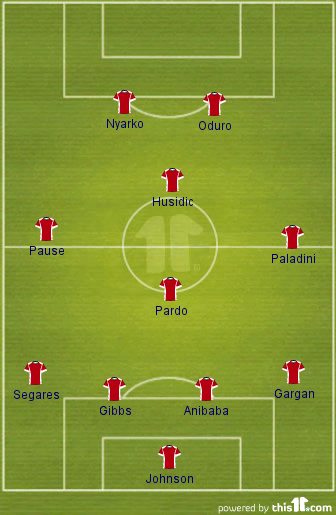 Notes: This is a mix of what the game notes had and based off a few recent games. I have Oduro in even with the cold but he could be replaced. Also, you could see Corbon Bone in for Paladini. Again, its a pure guess on the roster here given the injuries and form this clubs has at the moment.

I still believe this is a winnable game for Dallas. The club is due for a goal (or two) and FCD does have the defense to keep them in the game. I doubt Brek Shea will go even though he'll be on the bench for this one (game notes had him starting so take that with a giant grain of salt). Dallas just needs to maintain possession and keep the pressure on the Fire early to get the lead. The longer this game goes tied or at 0-0 the more it will favor Chicago.

It is time for someone to step up and lead this club to a victory, either be the defense, someone off the bench, or wherever.