It's a busy day today in FCD land...there's more stuff we need to take a look at.

Steve Hunt has a Q&A with Barry Gorman up that's chocked full of good stuff and a must read before the draft.

MLSsoccer.com: Where are the negotiations with the midfielder playing in Europe who was discussed late last month?

Gorman: We’re in good shape with that. We should have something pretty much to announce next week.

MLSsoccer.com: Are you guys open to trading up in the draft or will you stand pat at No. 17?

Gorman: Everything is pretty much open at the moment. We’re pretty flexible. I think what people have to understand is we have an awful lot of our core players returning and we have been doing some work quietly behind the scenes.

MLSsoccer.com: What do you see as FCD’s biggest need? Is it a forward, depth at center back or flank midfield?

Gorman: I think it’s probably a combination of all of those. Being realistic, if we do end up with the No. 17 pick in the first round, it’s going to be a case of who’s still available. As always, we’re going to go after and get the best possible player for FC Dallas regardless of the position. It’s going to be basically who’s available at that point. The staff has been here and we have basically been working extremely hard and doing our homework.

Steve Hunt also has an article up saying that FCD could be going for a center back tomorrow and we also learn that Schellas Hyndman won't be in Baltimore....and he texts.

"I leave it in very good circumstances with the coaches. This has been a process that we have worked throughout the year," Hyndman said. "Hopefully I will have an opportunity to stay in contact with them during the draft. I’ll at least be on the phone, texting and so forth."

Ugo Ihemelu has left the USA team training camp in California due to injuries....I'm not liking this. Shut him down until mid February, they don't need him injured in the slightest going into 2011.

Jump for what former FC Dallas player was named in the top 10 worst MLS draft picks of all time and which one was the best as well as a picture that will give you chills.

Imagine if you could go back in time and pick a so-so left back over Taylor Twellman, Brad Davis and Shalrie Joseph. Would you? Of course not. At the time, however, it seemed like the best choice for Dallas. After missing his rookie year with an injury, Gbandi played five passable seasons before leaving for Norway, while New England picked two franchise players, Twellman and Joseph.

Now Chris Gbandi was by no means a great draft pick, but the 4th worst in MLS history? Gbandi was a starter on two of the best FC Dallas teams of the decade in 05 and 06. If the guy is a starter in the league for five seasons, I don't think you can really call him an all-time worst draft pick.

The league's early years were rife with misjudged picks -- in 1996, Eddie Lewis, who went on to represent the U.S. 82 times, and Ante Razov, the league's third all-time leading scorer, went in the final round of the inaugural MLS college draft -- but the most glaring example might be Hartman, who was taken second to last in his class. He was the goalkeeper of the year by 1999 and went on to set career regular-season records for wins (156), shutouts (93) and saves (1293). He trails only the retired Steve Ralston for all-time appearances, 353 to 378, and minutes, 31,590 to 33,14

If you don't read The Big Picture blog you really should. Today they posted pictures of Haiti a year after the devastation of last year's earthquake. As some of you may remember, the Haitian amputee soccer team was hosted here last year and this picture appears in the blog. 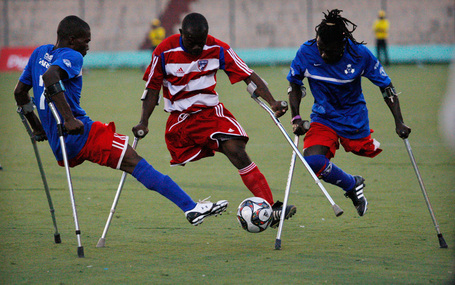 Just awesome....Get ready folks, tomorrow has the potential to be a crazy day.