Wednesday will of course be mostly about the expansion draft, but I want to get this out there before we get too far removed from MLS Cup.

7:30- Amy and I go ahead of the marching group to pick up our tickets from will call. I anticipated the line at will call being pretty big when 250 FCD fans converge all at the same time, but that never seemed to happen.

7:45- Everyone has their ticket and it's go time...we march into the stadium and while I was a bit worried at first that we would be near the top, my view turned out to be pretty spectacular.

8:30- We're all going nuts when the teams walk out on to the field for introductions. It really is a chill-down-your-spine feeling.

8:45- Game on. You'd think we'd feel at least a little bit of cold, having come from a city that can't remember the last time temperatures were near freezing, but I don't feel a thing. Once the game starts, the nervousness instantly(and temporarily) goes away and it's all business. We're singing, chanting and it's just like the 100 other Dallas games I've been to(except 100x better)

Keep reading for GOAALLLL, dejection and the trip home including something I've never done on a plane before.

9:10- It happened on the opposite end of the field that we were on but David Ferreira latched onto the end of a Marvin Chavez cross and Dallas goes up 1-0. The section goes absolutely bonkers, we're all falling over each other, hugging and screaming. For those that don't follow soccer that closely, this feeling is why you travel 1,500 miles on less than a weeks notice and a tight budget. This feeling is better than any artificial high. A feeling of pure joy that has me screaming "vamos!" like a madman and I'm not hispanic in the slightest bit.

9:30- The whistle blows for halftime and Dallas is 45 minutes away from our first championship. Those of us who have been around for awhile knows this thing is so far from over though, especially since we're playing our playoff nemesis Colorado.

945-1100- It's honestly tough to write about this. You all know what happened if you're reading this blog. Things fell apart and it's the most deflating feeling you can possibly imagine. I've been to an Oklahoma national championship loss a month after I graduated college, the Rangers World Series loss, and multiple FC Dallas playoff heartbreaks but nothing compared to the feeling when the final whistle blew. My wonderful fiancée who started watching the team before I did is bawling as is Gina, others(myself included) are just looking in stunned silence. I just couldn't watch Colorado lift the trophy and headed out of the section down to where some FCD fans were. No one talked, we just stood there.

11:30- You can still hear the celebrations of the Colorado players and fans from outside the stadium. I want to just walk back but I can't find Amy and I wasn't leaving without her. Eventually I found her talking to FC Dallas legend Bobby Rhine. Bobby is almost as deflated as the rest of us.

12:00- We walk back to Shoeless Joe's to find some friends/fans that we've known for a long time. It's nice to be able to discuss the game with people who have been there and feel the same disappointment as you. Also a huge shoutout to Quinn, a New England fan, who adopted FC Dallas for the weekend. If there's any fans that know what we went through on Sunday night, it's New England fans. I was pretty hungry though and I scarfed down some pizza type stuff that wasn't very good and overpriced.

1:30- Catch a cab back to the hotel. Watch the Ferreira goal but couldn't bring myself to watch the Colorado goal or any other highlights(still can't)...fall asleep pretty quickly after that.

9:20A- I kiss Amy goodbye(she has a non-stop flight) then Barrett and I head for the subway to get to the bus terminal. We thought we had left with plenty of time but we make it on our 10A bus to Buffalo with just a few minutes to spare. Good thing too because the bus driver(a dead ringer for Roy Hodgson) was a jerk with a lead foot.

12:15P- After sleeping through half the trip(I missed Mississauga?! nooooo) we hit the border, thinking we were in great shape to make our 3PM flight to Chicago.

1:00P- We're still just sitting in our bus right outside the customs office and it's starting to get a bit ridiculous....by 115 we finally go in and get through customs with the same people who have been sitting at their computers for an hour while we sat in the bus.

1:50P- Really starting to get nervous here...the bus finally is loaded with everyone through customs and we head to Buffalo which is basically just ten minutes away.

2:25P- Thank goodness we get to the Buffalo Airport after a short stop downtown. There's Colorado Rapids fans that have a flight at 2:30 but there was almost no one in the airport so security was a breeze...I wonder if they made it on their flight?

3:00P(eastern time)- Wheels up from Buffalo to Chicago and I did something I've never done before on a flight. I talked to the guy next to me for literally the entire 1hr and 45m of the flight. Young dude like myself who was in the military and now does contract work in places like Afghanistan, Kuwait and Qatar. It was fascinating to talk to him about life in those countries as a civilian and I learned a bunch. Just goes to show you can learn something from everyone you meet.

4:45P(central time)- Barrett and I eat at Chilis in the airport(chicken enchilada soup again...it's damn good). There's a severe thunderstorm right on top of the airport and I'm glad we landed when we did because almost every arrival is delayed at the moment.

5:30P- Barrett was strangely on a different flight than me to Dallas and while his was delayed I was lucky enough to have my flight leave on time. Let me tell you, this was the absolute nicest plane I've ever been on. Sitting in coach I had fold flat seats and personal tv with remote. Fellow FC Dallas fan and plane enthusiast Joey informed me that it is a 777...big ups to American Airlines for this one. I started watching "Grown Ups" with Adam Sandler and co, but it was god awful. I turned it off after 15 minutes and spent the rest of the 2 1/2 hour trip watching an old, trusty favorite, Curb Your Enthusiasm....after you've laid almost on your back on a huge, brand new plane watching one of your favorite TV shows there's no other way to fly.

9:00P- Landed in Dallas, got the bus to my car and I'm headed to pick up the fiancee from gymnastics...yes she loves her gymnastics class enough that she went straight from the airport there. That's dedication. The trip is basically over now.

First off, I want to thank you all for reading this. It's been a heck of a lot of fun to write and have so many readers(this site has pretty much set a new record for traffice every day since Thursday).

For a lot of people, the enjoyment of a road trip depends on whether the team won. This is certainly understandable, but for me it is about so much more. I became emotional as the plane from Chicago descended into Dallas thinking about just how far things had come. My first Dallas soccer game, June 27th 2004 on my 18th birthday, I had no clue what I was getting myself into. A wiry kid who finally got his liscence, I just wanted to check out another Dallas team. Now I'm 24, college graduate, getting married in May but still going to watch the team and I wouldn't change a thing.

They may not have brought home the trophy, but a week from now that won't really matter. I've been on road trips with as few as 4 people before and stood in the supporters section with 15 people on swelteringly hot summer days. Not once had Dallas even won a playoff series that I had seen...now my team is packing out a bar in Toronto and marching to the championship game with hundreds of people. I thought to myself how could I possibly come back to Dallas disappointed by all this.

So for now, it's still ok to be sad for the loss...it sucks to come so close to something that you want so bad and to fall at the final hurdle. However, in a week or so every Dallas fan, both long suffering and newly added, should reflect on this season and what an overwhelming success it was. A former laughing stock is now the most feared team in the league and all of you have to be there on opening day 2011 to welcome our opponents to hell.

For me, I'm already excited for the prospects of next season with a young, coming of age team that needs just another piece or two in order to dominate the league.

The marriage in May is going to deplete the finances so who knows when the next road trip will be(by my count, I've been to Denver 4 times, Kansas City 4 times, Houston 5 times, Chicago, Salt Lake City, Austin, Charleston, New York and now Toronto) but I'll be looking forward to it because there's nothing quite like it. Mexico City for Champions League perhaps?

Dallas Til I die 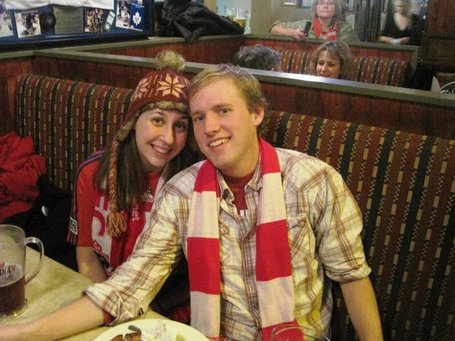 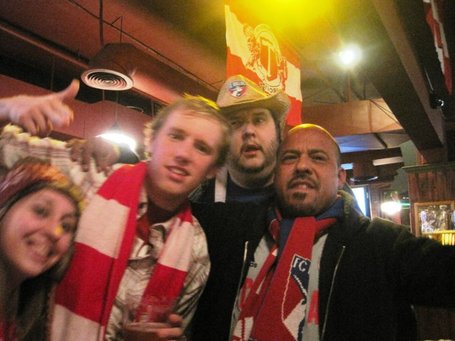 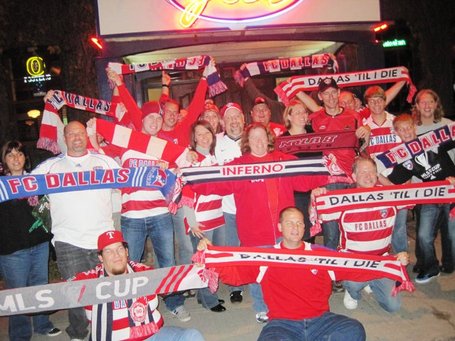