If you haven't already, make your prediction for how the playoff series will go and win 2 tickets to a future FC Dallas game.

Keys to the game

Play the way you've played at home all season. Pizza Hut Park has been a fortress for FC Dallas this season with just 1 loss in 15 games. Dallas must defend their home field and come into this game with the midset that the aggregate score is 0-2. Refuse to lose(or draw).

Jump on Salt Lake early. It may seem kind of obvious, but the best thing that could happen to Dallas is a first half goal to settle their nerves are force RSL to make a decision on whether they want to play the rest of the game offensively or defensively. The champions are extremely strong mentally and if it's 0-0 after 60 minutes, the advantage majorly swings Salt Lake's direction.

Jump for more keys, links and the awesome matchday reference card to print out and bring to the match

Come into this game with a swagger. There is absolutely no reason to fear playing RSL in Frisco. It's the most one-sided fixture in MLS history.

The referee must be strong and fair. Ferreira is going to get kicked. A lot. I can't find who the referee is for this match, but he must call the game fairly. Ferreira was fouled hard early in the game at RSL a few weeks ago, effectively taking him out of the game with a hip injury. This will happen again and the ref must be watching out for it.

Get Marvin Chavez active and into the game. FCD's best chances in the RSL game a couple of weeks ago were made by Marvin Chavez's work rate and speed. He gave the RSL right side problems all night and he needs to be the focus of attack early. Chavez was largely invisible in the Galaxy game and the team suffered majorly.

Lots of links today for obvious reasons....no quotes from the links you'll just have to read them

If there's one link you read today, read Andy Friedlander's story for the DMN. You'll learn a ton about what Schellas expects from his team and what went wrong in 2008.

Steve Hunt with lots of stuff....he says FCD could lean on Zach Loyd and Eric Alexander

Hyndman and Co. are bullish about the playoffs

Lots of great, informative quotes in this quick hits story from Steve Hunt

Brian Dunseth, a veteran of both teams, says FCD and RSL have issues heading into the series

Michael C. Lewis for the Salt Lake Tribune says that now would be a good time for RSL to break their duck in Frisco.

Steve Hunt sizes up the playoff experience on the FCD roster for FS Southwest.

"MLS impressed me with its rhythm and its speed," he said. "Things are going well for me here. I feel comfortable. I've gotten nothing by support from my teammates, my coaches, and the fans. It's made everything easier. I'm happy in MLS. I hope to continue here for many more years."

I've been wrestling back and forth with this because RSL is a great team, probably the best in MLS. However, FCD is lethal with Kevin Hartman in goal. I think FCD wins this one with two first half goals...RSL gets one late. 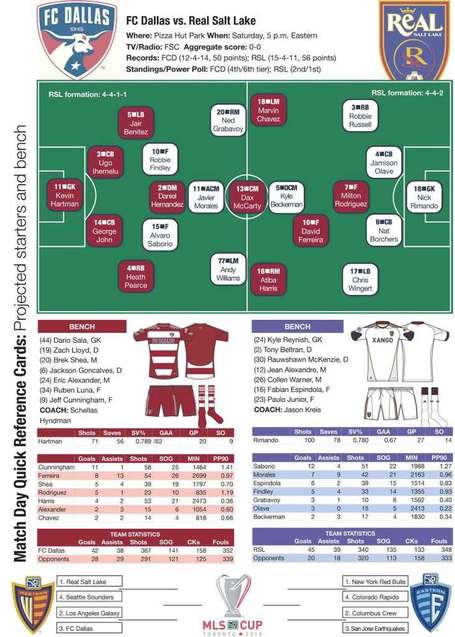