The Case for the Bundesliga

Share All sharing options for: The Case for the Bundesliga

While we all rejoice that the international break is over and many dust off their Chelsea and Liverpool jerseys for a Saturday morning in front of the TV or out at The Londoner, I implore you to turn the channel over to GolTV(now in HD on Time Warner!) or ESPN Deportes and give the Bundesliga a chance.

Why should you spend your precious Saturday mornings at the Rhein-Neckar Arena and Westfalenstadion instead of Goodison Park and Craven Cottage you ask? Read on and find out...

Try to predict the Bundesliga season...

When it's a huge story that a team other than the big 4 in England qualified for the Champions League, you know you've got some problems. Just two seasons ago, Hertha Berlin finished fourth and six points from the championship and now they find themselves in the second division. That same season, Wolfsburg, a team 3 points from relegation in 2006 was the champions....think about a team equivalent to Sunderland winning the Premier League. Not a snowballs chance...Sure I enjoy watching the Premier League, but it's tough for me to get that into things when the goals for the team I supported while living in London, Fulham, is to finish 7th or 8th.

Keep reading to see how watching the Bundesliga will allow you to one up your friends in future soccer conversations...

Like to say you saw someone before everyone else did?

We all have those friends who brag about seeing Kevin Durant or Drew Brees in high school or maybe that guy who's been watching Ruben Luna play for the past two years(*shrug*). Now you too can one up your friends and provide scouting reports on Edin Dzeko, Lucas Barrios, Marko Marin, and Eljero Elia during Euro 2012. Had you been watching FC Bayern last season, you would've already known all about Thomas Muller and Holger Badstuber during the World Cup while everyone else is firing up Wikipedia.

Star power? Germany's got that in buckets

All you have to do is look at Bayern Munich's devastating attack. Ribery, Robben, Muller, Klose, Olic and Gomez with Schweinsteiger and Van Bommel crashing the box behind them...just try and stop that. A look around the rest of the division and you'll find players like Ruud Van Nistelrooy who, with Hamburg, has recently regained the form that saw him get his first Holland call up in forever. There's also Raul at Schalke, Michael Ballack at Leverkusen, and Diego who recently joined Wolfsburg from Juventus.

Root for the underdog? Bundesliga is for you

Look at the top of the Premier League table right now and it's Chelsea, Arsenal and Man United. Take a look at the Bundesliga table and you might do a double take with Kaiserslautern, a newly promoted side, sitting at the top. Granted this is a very small sample, but in Germany the little guys can be someone too. Just two weeks ago, Bayern Munich marched into the Fritz-Walter-Stadion(Where the USA famously gained a point against Italy in the 06 World Cup) and left with their tail between their legs and a 2-0 loss to FCK. Bayern did the same thing in 09 losing to newly promoted Mainz. The promoted sides in England against the top 3 last season? 1-13-4.

The best atmosphere in Europe

If you enjoy watching games with a raucous atmosphere, there's no better league than Germany. Averaging almost 42,000 fans a game, the Bundesliga is the highest attended league in the world and the fans bring the noise every game. There are maybe three or four atmospheres in the Premier League that can match almost any Bundesliga atmosphere and none can touch the Tifo game that German fans bring. 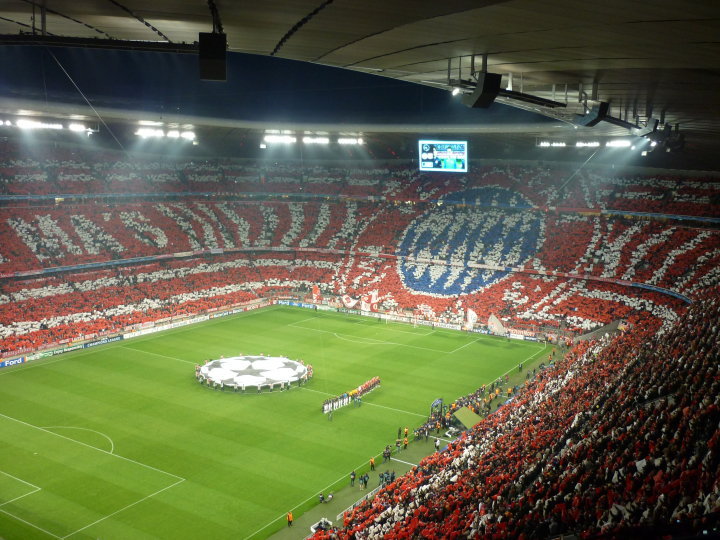 If you want to give the Bundesliga a look this weekend, there's no better game than Bayern Munich vs Werder Bremen, one of the marquis matchups of the season. You can catch that one online at ESPN3.com.