The Future is Now for Ruben Luna

Share All sharing options for: The Future is Now for Ruben Luna 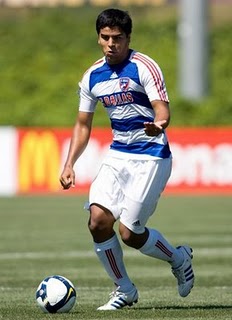 The future of FC Dallas goalscoring, Ruben Luna, will make his debut on Saturday according to the FC Dallas Official Training Report filed a few minutes ago.

Hyndman made special mention today that Ruben Luna would dress for Saturday’s match against Toronto FC (7:30 p.m. CT) at Pizza Hut Park. Luna previously dressed for the Aug. 14 match in Washington against D.C. United, but did not see time in the game. This will be the first FC Dallas home game that the 2009 U16 U.S. Development Academy Player of the Year will suit up.

"Playing with the first team would be a dream come true," Luna said. "I have been working really hard lately, trying to improve my game. I hope to get the opportunity to score goals for FC Dallas in this stadium very soon."

Hopefully FCD gets a big enough lead to put the youngster in the game.