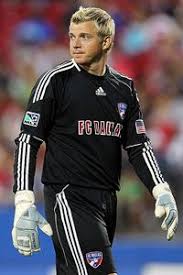 Another 3 points for FC Dallas on Saturday night in what was a poor game marred by ridiculous heat that should finally be breaking soon. I'm not sure how many times it has to be said, but the starting time for any game in July or August should be 8PM. Not that it would've made a huge difference on such a stupidly hot day, but the second half was played at a much better pace than the first half.

-Once again Kevin Hartman is man of the match. In a game where the team just couldn't get into much of a rhythm, El Gato saved the 3 points with two enormous saves. It wasn't always pretty, but a clean sheet is a clean sheet. I feel more comfortable with him in goal than any goalie since Dario Sala in 2006.

-Good teams find a way to win when they're not playing at their best and FCD has done exactly that for pretty much the last three weeks. Granted they were against arguably the three worst teams in MLS, but 9 points from those 3 games is all you can ask for and they've done it. I just hope the boys aren't getting a bit complacent, because Saturday night's effort taken to Columbus next week will get Dallas sent home with nothing.

-Brek Shea needs to slow down scoring or FCD won't be able to keep him in MLS through next season. He seems to have put all his young selfishness of the past behind him, has bought into the system and is playing the best soccer of his life. I love this quote from Brek after the game, it shows a kid growing up and really reading the game well.

"Besides the ball [from Benitez], Atiba is the one who gave me the goal," Shea said. "He made that hard run and took everyone away, which left me free."

-I do think Martin Vasquez is turning Chivas USA around. This was a terrible team that he took over at the start of the season, and based on Saturday's game I think the Chivas brass should certainly keep him around to start the next season. They were fighting for each other, well composed and have some very solid pieces to build around. I'd love to see Justin Braun in Frisco.

More game thoughts, lots of stories and quotes after the break

-I think Milton should be dropped to the bench in favor of Jeff Cunningham next weekend in Columbus. His one good free kick aside, Rodriguez didn't do a whole lot for the third straight game and Cunningham always seems to play well against his former teams.

-I'm torn on whether the attendance is something that I should really be concerned about after this game or not. There's no doubt that 10,300 is not a good number, but before the game it felt significantly hotter than the Sunday afternoon game. I guess if attendance is good April-June and September-October, the poor numbers in July and August can be tolerated.

-I haven't seen this confirmed anywhere, but I was told after the match that Daniel Hernandez and Atiba Harris will both be out next week due to yellow card accumulation. If this is the case, we need to discuss what happens next week to the lineup and it isn't pretty. Edit: 3rddegree has tweeted that they are not suspended.....thank goodness.

-With Los Angeles losing, FC Dallas creeps closer to controlling their destiny in the Supporter's Shield race. With a game in hand and a game left against Los Angeles, Dallas needs to win their game in hand and make up 2 points on LA between now and the final game to head to the HDC with a chance at the trophy on the last night of the season. First things first, let's try and find a way to keep the road unbeaten streak alive in Columbus.

Steve Hunt with his DMN gamer

Shea's goal, his fifth of the year, came off a great cross from Jair Benitez, his second assist in three games. Fellow Colombian David Ferreira also got his team-leading eighth assist as he initially fed Benitez on the left side.

And some very interesting game notes

Shea goal a positive sign: When Shea headed one just out of Thornton's reach for the game's only goal, it was a good omen for FCD. Shea now has five goals and four assists in 2010. Dallas is 8-0-1 when he has a goal or an assist. That includes a two-goal performance in a 2-0 win over San Jose.

Steve Hunt cranks out another gamer for FCDallas.com

Until Brek Shea’s fifth goal of the season in the 71st minute, it looked like this one might finish in a scoreless draw. Both teams were clearly affected by the heat, which was measured at 102 degrees at first kick.

"It was like putting your head in an oven. It was pretty hot," Hyndman said. ""The heat affected all of us, even the guys on the bench."

The great Phil Stephens with his gamer for Dallassoccernews.com

Chivas coach Martin Vasquez was disappointed in the first half of play for his team, but saw opportunities come and go in the second half.

"It was a poor first half," Vasquez said. "We created chances in the second half, but I thought their goalkeeper came good and we couldn’t put one away. It was a lack of concentration on the goal we gave up. Overall, it was a good second half, but where we are, we can’t afford a bad first half."

Jay Brownlee with his Zip It article for 3rddegree

Speaking of clean sheets, the shutout is particularly noteworthy due to the absences of the injured Dax McCarty and Ugo Ihemelu, replaced by rookies Eric Alexander and Zach Loyd respectively. Neither starter’s position on the pitch is easily replaced.

3rddegree also has some excellent match photos from Matthew Visinsky....this one is my favorite.

Sorry I'll try to get more timely with these recaps....